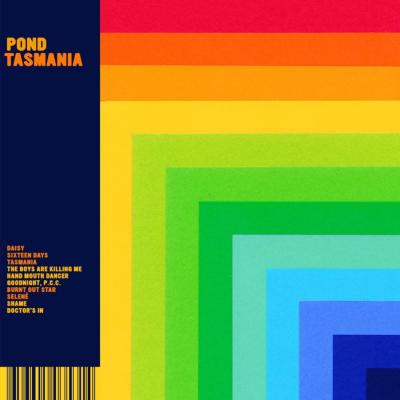 On March 1st, Pond released their eighth studio album, Tasmania via Spinning Top Records. The album, which the Australian psychedelic rock band has described as a “dejected meditation on planetary discord, water, machismo, shame, blame and responsibility, love, blood and empire”, serves as a sister album to the band’s 2017 release The Weather, which serves as a concept album that discusses the oddities of colonial cities.

Tasmania clearly continues this discussion with the album’s name comes from a time when Allbrook went out drinking with an environmental scientist, which lead to a conversation about the global crisis, climate change. Recounting the temperature projection for the next 100 years in Australia, Allbrook describes, “it basically just goes gradually more and more red and purple, and then into unliveable territory. The last inhabitable space is Tasmania”. The Weather looks into place as a habitable space being taken over by humans, while Tasmanialooks into place as a space which will become uninhabitable for all humans as nature will inevitably take-over.

A central theme for both albums is respecting place. Tasmania follows this pattern by opening with the third album single “Daisy”, where Allbrook ponders, “I might go and shack up in Tasmania before the ozone goes, and paradise burns in Australia, who knows?”. In keeping with the respect of place, a message at the start of the “Daisy” music video reads “we respectfully acknowledge the Kulin and Nyoongar Nations, the traditional custodians of the land where this film was shot”. At first glance the trippy video with the psychedelic, dream-like, music embraces the band’s classification in stoner-rock, however the video is strife with environmental thought. Bright neon colours and bold shapes ensue as Allbrook frolics and dances around for the best part of six minutes, waving an aluminum heat blanket like the flag bearer of global warming. The dusty barren land, in which the video is shot, speaks to the inhabitable consequence of heat on our planet.

The environmental agenda is held throughout the album as the  second single “Sixteen Candles” tells, “while the whole world melts, am I just meant to watch?”. Allbrook makes their ideology known in “Hand Mouth Dancer” with “so you got political, can you speak on that? I didn’t get political, I just faced the facts”. The eight minute long trippy serenade of “Burnt Out Star” is heavy and drawn out. Finishing the album with a dreary percussion countdown, “Doctor’s In” reassures the listeners that it will be “alright”. But it’s safe to say that the world’s in a pretty dire state if the psych-punk rockers are starting to freak out.

Overall, The Weather and Tasmania work seamlessly together in a deeply layered album that evokes environmental, social and political consciousness in their lucid soundscapes.