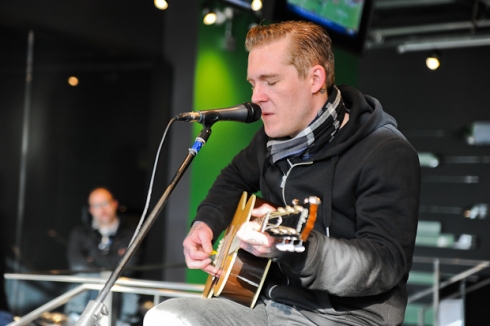 Brian Fallon, of Bruce Springsteen approved New Jersey outfit The Gaslight Anthem, came down to the Edge 102.1 Studio at Sugar Beach on Sunday afternoon for a brief acoustic performance ahead of his band’s sold out show at The Sound Academy that evening. Despite the cold weather a small group of dedicated fans stuck out the wait in order to get in to see this rare, intimate set with the singer.

Wrapped in a scarf and a jacket and perched on a stool he didn’t cut the most imposing figure, but he didn’t need to. Rather than the bombast that comes from a Gaslight Anthem live set, this was an earnest quiet performance.

Replacing his gruff, booming singing voice with a quiet near whisper, unamplified was almost hard to making out. What it did though, was give the songs a sense of intimacy, and gentleness that they lack on record. Opening with new song “Halloween,” which will be appearing on a soon to be released Fan Club only 7”, it sounded very much in line with his other songs. He then moved right into “45” from the new Gaslight Anthem album Handwritten, while the gentle acoustic take robbed the song of much of its immediacy, it instead gave it a quiet tenderness that is missing from the full band production. He closed off his short set with “Mulholland Drive” joking beforehand that he might fuck it up. He managed not to though, to the appreciative applause of some fans who got to see something special by one of their favorite musicians.