Posted by Aesthetic Magazine ⋅ August 30, 2013 ⋅ Leave a comment
Filed Under  Brutal Youth, The Atom Age, The Dwarves, The Horseshoe Tavern, The Queers 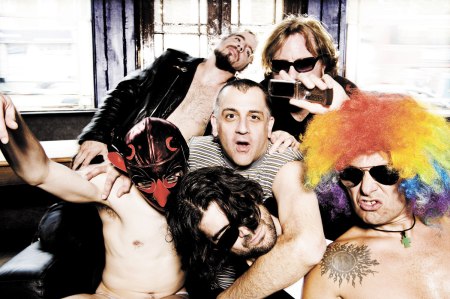 On Wednesday night, the Legendary Horseshoe Tavern in Toronto did what it does best, played host to one hell of a punk show.

Local flavour, Brutal Youth, started things off as they found their way into to the audiences’ hearts with their own style of punk hardcore. Lead singer, Patty paced around stage and repeatedly hit himself in the head with a microphone while making exaggerated faces. After he was able to climb onto the amps, and jumped down on to the stage he explained to the crowd his love for the sport of wrestling, it all came together. A few loving fans were at the front of the stage and were able to sing into the microphone to fill the words. Near the end of their short set, with security guards watching closely, Patty once again climbed on the amps, then hung off the pipes in the ceiling while still being able to scream melodic tunes, only to release himself onto a fans shoulders who carried him back to the stage. You know it’s a good show when the band pisses off the venue. Over all, the female drummer, Kaitlyn Bean, was an absolute powerhouse and the band proved worthy of opening up for two legendary punk bands.

The second of the four bands on the bill came to us from the bay area, Oakland, California, The Atom Age, who consists of five members, including a drummer, two guitarists, bass player and saxophone. Unless you were of age to drink in the ‘90s, this would have been a rare opportunity to move around at a punk show with a saxophone player rocking out on stage. It was fantastic, no longer do people born in the ‘90s need to be envious while watching the club scene in the movie Clueless which features a performance by sax lovers, Mighty Mighty Bosstones, the saxophone is back and is here to please. Punk rock infused with ska and rockabilly, delivered spectacularly, these boys shouldn’t be missed on their next trip up north.

When Portsmouth, New Hampshire’s The Queers took the stage the crowd was unusually tame, which made the impression that this influential American punk band might have outstayed their welcome. The Queers are no strangers to Toronto, as they’ve played here more than any other international band, though are always able to draw a crowd. The fact that they always play with equally amazing bands on every tour does help fill the venue. By the time the band played a few songs and started into “Ursula Finally Has Tits”, the audience finally was able to execute a respectable mosh pit and the fun began. The set was short, only a half hour, Joe Queer explaining it was because the band themselves couldn’t wait to see The Dwarves play. The audience was still pleased, as always and every girl in the place went nuts for “Punk Rock Girls”, a true anthem for men and women alike. Ending the set with “This Place Sucks”, followed by a Black Sabbath-sounding guitar riff, The Queers refuse to change, nor should they.

Finally, the versatile, funny and iconic punk rockers from San Francisco, California, The Dwarves destroyed one of Toronto’s most loveable venues. Spewing out fan favourites “Is Anybody Out There”, “Everybody’s Girl”, “Lets Fuck”, “You Gotta Burn” and “Lets Get High and Fuck Some Sluts”, allowed the audience to go insane. Lead singer, Blag Dahlia is a great example of a front man, interacting with the audience, allowing fans to sing into his microphone and changing his disposition to suite every song, it was hard to take your eyes off the tall, sturdy singer. At one point Dahlia, jumped off stage and into a belly flop, with the audience holding him up he still belted out every word without missing a beat. The band was incredible as well, giving it their all, hard and rough, loud and proud. With the crowd dancing in a sea of sweat, people tumbled around and constantly fell over in the pit and lots of screaming consumed the venue.

Overall, they delivered everything a punk rock lover could hope for in one evening, a lot of bruises, clothing drenched in beer, some unforgettable moments, some moments wished to be forgotten and a full-out good time. The Dwarves are legends and proved to every Torontonian in the Horseshoe on Wednesday why they deserve to be. Every punk rock band that ever wonders how to do it well should look to this band of misfits and take many, many notes.