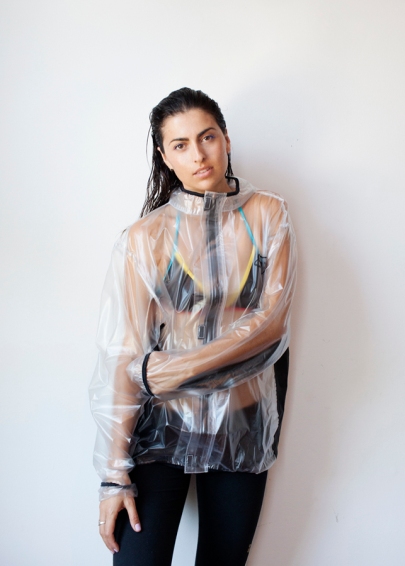 Anna Lunoe is someone who has gathered popularity and acclaim in the past few years. The Australian dance music producer relocated to LA last year and her latest single, “Breathe”, showcases her ability as a vocalist and producer. In addition to her collaborations with the likes of Flume and AC Slater, her back catalogue contains an impressive array of releases on renowned labels like Future Classic, Fools Gold, Fjordin and Yes Yes Records.

She’s been touring with The Weeknd and Banks this fall and they played three shows at both Massey Hall and Sony Centre in Toronto this past week. We managed to catch up with Lunoe on a rainy Saturday in the city and spoke about topics ranging from the Australian music scene to how Diplo and A-trak once wrote supplementary letters for her visa application.

Sasha Kalra: You’ve been here for a couple of days now and the tour is coming to an end. What has it been like to tour with The Weeknd?

Anna Lunoe: It’s really sad that this tour is coming to an end, we’re really sad about it. We’re so used to hanging out every day now!

Kalra: How has the reception been from fans of the Weeknd to your music? Have they taken to it?

Lunoe: The cool thing about The Weeknd’s fans is that they could be dance music fans or rap fans or pop fans. They’re very diverse and I think that the way that I approach my set it’s more of just setting it up for the night. I play music to get people warmed up. It’s not really a showcase of my music. Having said that I do play about six of my own songs during the set, my remixes and vibes, so I include a lot of my work but the goal is to set things up for him.

Kalra: I saw on Twitter that you were speaking about how dance music can produce fads that come in and out fairly quickly these days.

Lunoe: Yeah! Traditionally, a community within dance music generated dance music genres. So Toronto has a really cool scene. You guys have blogs and you’ve got a club scene that suits the music. You guys have got a bunch of producers that are making a certain sound and it becomes ‘Toronto dubstep’ let’s call it. And than the world decides ‘Oh that’s cool, did you hear what’s going down in Toronto?, etc.

The Internet is amazing because people don’t need to be in a capital city with a clique to get their music out to the world. They can upload anything and become the next “Harlem Shake”. You can do anything. But, there’s a danger in that because things last when they make an impact. And things make an impact when they have time to generate and time to develop through blogs, clubs and into a scene. That’s when you make a lasting impact on the world. It’s like punk in New York in the ‘70s. If that was just kids uploading music from all over the world it would become popularized in a year, six months or even three months. It becomes too popular and the cool kids turn on it. That’s the danger with the Internet. I feel like I’m really seeing genres as more like trends. Everyone jumps on board a trend for 2-3 months and then it blows up and becomes uncool. Everyone turns on it and the cycle continues. That’s what I’m noticing a lot in dance music. It’s not new and it’s been like this for the last two of three years.

Everyone jumps on board a trend for 2-3 months and than it blows up and becomes uncool.

Kalra: Australia is producing some great musicians and producers these days. You’ve worked with Touch Sensitive and Flume. What would your take be on the Australian scene now and these great artists that are emerging.

Lunoe: I would say that it’s not new at all. It’s got the benefit of being on an island a long way away. You guys group it all together. They’re not actually that similar. Flume isn’t exactly the same as Touch Sensitive and it’s very different music. It’s grouped together because they’re from the same place.

Kalra: There definitely seems to be a lot of camaraderie in the dance music scene as a whole though.

Lunoe: There’s 100% camaraderie. That’s exactly what I’m talking about. It’s a group of people together empowering others, touring together, working together, cross-pollinating and sharing ideas while giving people something to grab hold of and pinpoint so they can say “oh that’s the Australian thing going on right now.”

Kalra: I read somewhere that A-trak and Diplo helped you out with letters of reference for your American visa?

Lunoe: Yeah! Years ago! As an Australian to get a VISA you have to get 12 letters of recommendation in your field. They’re people that I’ve toured with for the last five of seven years so they’re the best people to write the letters. They were kind enough to do that and I’d do it for them.

Kalra: And of course it all started at a community radio station. How did you find your footing in the industry?

Lunoe: I always wanted to make music and do that and I always have. I guess when you leave school though you don’t always think, “I’m going to be a musician”. You do a couple of different things at the same time. I left school and I did some theatre for a while and loved doing acting and theatre. At the same time I started working at a radio station and volunteering for radio. I was singing in a band before that. I don’t know, I just kind of did what felt right and tested the water with all different artistic endeavors.

Kalra: Is singing something you want to do more of in the future?

Lunoe: It’s not like I want to be a vocalist. I don’t think that I’m the world’s new Aretha Franklin or anything like that. But as a producer having my voice is something that’s useful and makes my songs my own.

Kalra: What are you listening to these days?

Lunoe: I don’t know. It’s always different stuff. I’m not good at naming stuff and I’m actually really bad at that actually. People are like “what are the five best songs you’ve heard in your life” and I’m like “I don’t know”. I recently just made a mix that I put on my website. I made it for Sole Bicycles, which is a bike company. I made a cool Sunday afternoon mix with a lot of UK rock stuff and more kind of indie house stuff.

I think that it’s really important to surprise people, challenge them and let them decide if they like it or not.

Kalra: There was quite a contrast between that and your Sway in the Morning mix. I’m guessing that was intentional.

Lunoe: I’m not going to do the same set 100 times. I’m not interested. I’m going to do different stuff and some of my mixes are going to be a little left of centre. And people might listen to it and decide that they don’t like it. Some people might listen to it and be like “oh my god I’ve never heard music like this, this is insane”. It might inspire them to do something else. I think that it’s really important to surprise people, challenge them and let them decide if they like it or not.

Kalra: Definitely. Have you had a chance to check out Toronto at all in your short stay?

Lunoe: Not really, I’ve actually been eating wherever I can hide and avoid the rain.

Kalra: And hanging out in coffee shops