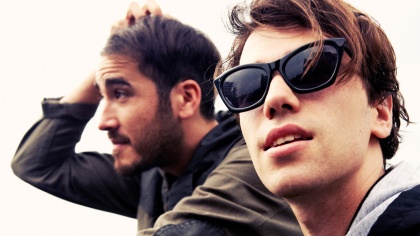 Australian guy-girl duo Fascinator opened the show as they appeared in shimmery Komodos and adorned with baseball caps-turned googly-eyed head masks. Centered on modulating laptop beats that borrowed from techno, house, and jungle music, the instrumentation alternated between guitar and clarinet, with an analog and a MIDI controller version of each on stage. The longhaired scruffy Johnny Mackay (Children Collide) downpitched his voice to interact with the slowly assembling crowd, creating an off-putting persona that resembled Buffalo Bill from Silence of the Lambs. Showing impatience with the beat-centric music, the flurried guitar playing unfortunately muddied the most uniquepotential in the act through the voice of the MIDI woodwinds and clarinet sounds. Ultimately, it was the strength of the beats themselves that found resonance with head-nodders and partygoers in the immediate area of the stage.

As the lights dimmed to the ambient sounds of chirping as Sydney, Australia trio Jagwar Ma’s beats controller and multi-instrumentalist JonoMa planted behind his console-station in the nu-drummer stage position, and unfurled the languid rolling synths of the humid “What Love”, with Gabriel Winterfield’s reedy looped-vocal harmonies strewn across the song. An audience member responded to the heady start by shouting “do that again”, and they obliged throughout the night as they delivered their summery tunes with healthy extended sections of steeped acid-house-styled sub bass. Out of their climate and swathed in hoodies and beanies, the members eventually warmed up and tapped into the audience’s excitement with the striding rhythm and swirling guitar riffs on the Primal Scream-influenced “Man I Need”. As the song fluttered out, Jack Freeman’s bubbled bass riffs extended into the psycho-tropic “Excercise”, which filled with Ibiza piano stabs and an energetic Winterfield who chanted the song’s title into cascading loops. The latter of the set further indulged the acid-house streaks with “Four”, the powerful throbbing bass, simmering hi-hat, and chopped vocal samples gave Thursday night Hoxton regulars their moneys worth, and ended with a sludgy, slinking bass-line.

Offering a respite, the jangly “Let Her Go” accentuated Britpop guitar strumming, multi-part harmonies and a wha-pedal guitar solo, which burrowed the synthy accentuations and percussive beats. On the buoyant “Come Save Me”, Winterfield’s classic doo-wop melody floated over beach-party drums and surf-rock guitar riffs, before it swayed into a synthy-krautrock propulsion. The set closed on their biggestbreakthrough so far with “The Throw”, the forward-lilting rhythm, strutting bass groove, guitar thrusts, and arena-reverb vocals catapulted into a squelchy synth driven extended section that demonstrated their ability to inflate their already dense sound for even bigger festival-sized audiences.

As the audience began to trickle towards the night, uncertain as to whether there would be an encore, they returned with the rolling trip-hop rhythms and guitar-strummed ballad “Did You Have To”, flecked with squealing synth chirps. To close the evening, calypso-castanet percussions on the upbeat soul-influenced “That Loneliness” tumbled into a fast-moving techno-house beat, engorged with phased synths and intermingled guitar stabs. The occasional clumsy transitions aside, Jagwar Ma delivered a dynamic and convincing performance of inebriated psychedelia, deftly bound in an entrancing package of pop-sensibility, to the eager crowd now awaiting their return to Toronto.