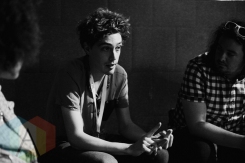 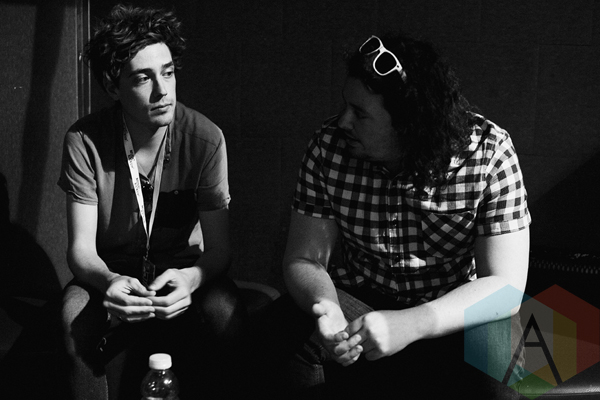 Born Ruffians, a 5-piece indie rock band hailing from Ontario, performed at the SiriusXM Awards Show on Saturday to close out another season of Canadian Music Week. Before their performance, members Luke Lalonde and Mitch DeRosier sat down with Elaisha Green of Aesthetic magazine to chat about the dashed dreams of CMW past, the influence of Canadian rock royalty on their music, and shaping their sound with each record towards their dream gigs.

Elaisha Green: Were there any shows on your “Must-Watch” list during Canadian Music Week?

Luke Lalonde: Yes. I only saw one show…it was also on my list. It was DIANA at the Drake. They’re pals and fantastic.

Mitch DeRossier: We’ve been weirdly busy this week, so I feel like we didn’t get out to see some shows, even though there [were] some really good ones.

LL: One that I think all of us wanted to see was Operator at Silver Dollar. And it was three nights so we thought we’d probably be able to go to one, but we were playing one of those nights… it would have been great to see them.

EG: Are there any Canadian Artists that have been influential in your work?

LL: Oh yeah tons of Canadian artists. From classic rock stuff, like Neil Young, The Band, Crosby Stills Nash and Young. I’d be lying if I said that [the Tragically] Hip didn’t have some influence on us because they have some amazing songs. I’m not a die-hard fan of The Tragically Hip, but their singles and songs…I loved them as a kid.

LL: The Constantines. It’s crazy seeing Steve [Bays, of Hot Hot Heat] and Hawksley Workman [together], who are now doing Mounties. I listened to Hawksley in high school a lot actually. [Also] tons of Canadian indie rock bands…The Unicorns, Tangiers, there are so many, Wolf Parade.

EG Any memorable CMW moments from past performances?

MD: We did the Silver Dollar for our first one.

LL: Well the first CMW we did play… we just were young and naive. The band that was headlining had a lot of buzz and we were on after them

LL: …thinking we’re going to kill it and get famous. But it was the Silver Dollar, and it was probably 70 people there who all left when [the other act] finished.

EG: Do you guys have anything that’s on your musical career bucket-list?

LL: Doing Letterman. Ever since I started playing music, ever since we started the band, in a way, was like maybe an attainable goal. I grew up watching David Letterman and it was always my dream to meet him, but he’s retiring soon. That and playing SNL, and the big festivals are always our goal. Every time we put a record out we’re like ‘maybe we’ll hit that, maybe we’ll hit the Coachella, the Lollapalooza, the Leeds and all that shit and we never do.