High Noon and Homecoming: An Interview with Arkells’ Max Kerman 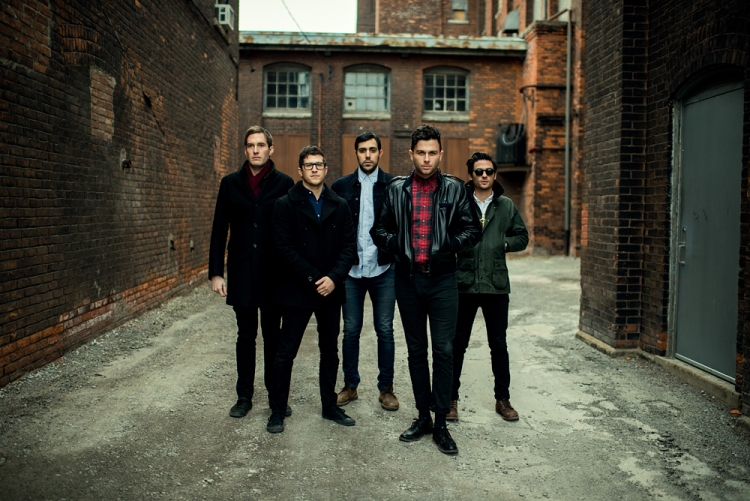 Arkells’ catalogue carries the rare distinction of being at once a series of relevant statements and the perfect anthems for your cottage deck. And through a relentless, seemingly unending touring schedule, the band has brought that sound all over the world. We got a chance to talk to frontman Max Kerman about their new album, High Noon (out August 5th), life on the road, his love of Hamilton, the rich diversity of Southern BBQ, and more!

It feels like you haven’t stopped touring for the entire time you’ve been around. What’s the longest you’ve been in one, single place for?

We’ve been home for a few months now, probably.  It’s usually the lull between the finishing and the release of the record that gives you the most time – which isn’t to say we weren’t busy – but we’ve actually had a couple of months at home (Hamilton) which is really nice. I’m not that great at sitting still for too long anyhow. It’s probably just my personality (laughs).

Where did the inspiration for High Noon come from?

We’re always thinking about music and always trying out new songs, so lyrics and chord ideas came at strange times. I’d be out with friends and all of a sudden an idea would come to me or I’d be at a music store testing out acoustic guitars and my fingers would do something weird that they’ve never done before and I’d get that down as fast as possible. For High Noon, the band first came together between December 2012 and January 2013. I mean, we’re really lucky that we don’t have to work other jobs and we can just really focus on the band.

Yeah, exactly. We feel really lucky to be able call this our full-time gig, so the album came together over a fair bit of time, but it worked out better that way.

With High Noon, How did you still maintain Arkells’ signature sound while still keeping it interesting and fresh?

The band always liked music that (lyrically) are the most fun to sing along to; songs that are fun to move to. I think that’s the thing that really joins the three records we’ve done. But I think the thing we’re most excited about was trying new things. We’re definitely not studio pros, but when we get in there, we have a lot of pent-up energy, which means we’re up to try anything. On High Noon, we did things like bringing in a string section. We had a great hand from our producer Tony (Hoffer), who’s just really into experimental music.

How did you guys connect with Tony?

It’s kind of a cool story. He was at the top of our wish list for producers, but none of them got back to us (laughs). One day, we got a Facebook inbox message from Tony himself. He’d seen a live performance of “Deadline” on Youtube and he just said, “I really dig that song! Let me know if you ever want to record it.” I guess he’d had no idea that the song had been out for a several years. So we got back to him and it turned out his manager had switched companies, so he’d never gotten the message to begin with. And so it just worked out. He’d seen that Fitz and the Tantrums had actually opened for us the previous summer and he’d just produced their record. He asked us if we knew about that record and we were like “we are very, very aware of your resume, Mr. Hoffer.”

And how did that resume (Phoenix, Beck, M83) influence High Noon?

I think all those bands are good examples of music that took a bit a left of centre, but those records also are made for the masses. They’re interesting in nuanced, but they’re not difficult to understand. I really appreciate production like that. It’s not too arty. There’s some music where the process is the main focus, whereas Tony’s production style keeps you focused on the song itself.

The Canadian music industry makes it tough for bands to sustain success for as long as the Arkells have. Right now, what kinds of commercial pressure do you feel?

We don’t really think about it in those terms, really. What we found is that when we make music that feels good to us, it translates to other people. I feel lucky that we get to make honest music that just connects with other people. So we don’t really feel much pressure because we’re not outto be a commercial band. Canadian music fans have just sort of received us in a really nice way. We’ve seen people with lyrics tattooed on parts of their bodies, which is a bit of an insane sort of honour. But then, we’re just as happy to see the people who just want to come to the show, get drunk and dance.

What key differences were there in your creative process for High Noon, compared to Jackson Square?

Musically, I think our palette has expanded over the years. As I’ve gotten older, I’ve grown to appreciate more. I know that’s the case with a lot of 80’s music. I probably wouldn’t have taken Don Henley particularly seriously in 2007, but these days he really speaks to me. So when you make a new album, it’s a reflection of the music you’re into. The great thing about the band is that we’re a product of a big mix of tastes and interests. And I think that’s why our records are pretty diverse. There are so many influences affecting that Arkells sound.

How much of that comes from being on tour?

I think it’s more from just seeing more music performed live than being on tour. You get to hear music on a different level and seeing how these bands pull them off live. You start to see that, for a lot of bands, that’s how it was meant to sound.

What’s going through your mind when you step out in front of a Hamilton crowd these days?

It’s really nice. Around here, I feel like people are proud of us, which is a really nice feeling.People say hi to me on the street and say things like “keep it up”. I think that’s how I compare Hamilton to Toronto. It’s by no means a small town, but it still manages to feel more personal than just being another band in Toronto.

To that point, what’s your most ‘Hamilton’ story?

When I’m home, I have a rotation of coffee shops and restaurants I like to go to if I’m not working from home. I live on a street called Augusta, which is just full of pubs. Inevitably, when I’m riding my bike home, I’ll wave to maybe six people per patio, which is really cool. You can see all your friends congregating in the same place. I think that’s something you only get in a place like Hamilton.

Does Hamilton have a signature sound?

Not at all and I think that’s the best part about it. You’ve got your punk bands like Teenage Head, you’ve got your rock bands like us, heavier bands like Monster Truck, the Junior Boys and great electronic bands like Caribou. I really like that it doesn’t have a signature sound. It’s not at all just a ‘rock’ town.

With all the touring you’ve done, you’re something of an authority on the subject. That said: What is there not enough of while touring Canada?

I find the food selection could be a little better. When you’re touring America, the food changes by region so when you’re on the West coast, there’s really awesome Mexican food, when you’re in the South, there’s Tex-mex, BBQ – there’s actually different types of BBQ for each area of the South. There’s Kansas City BBQ, North Carolina BBQ… On the East Coast, there’s amazing seafood. I mean, you get a bit of that in the Maritimes here, but overall I think Canada could step up its food game a little.

What is there too much of?

What does Canada have for touring artists that no other country has?

We have longer drives (laughs). There’s a friendliness here that’s unique to Canada, actually. We’ve toured the States pretty extensively, and we’ve noticed that when you get up to Minneapolis, you actually feel like you’re back in Canada again because everyone there’s so much friendlier. The whole city feels like a community, which is something so unique to Canada. I think this is one of the world’s most humble countries. Every band we’ve met, whether they’ve been arena or club acts have always been so gracious are just full of humility. I’d say that’s pretty much the experience with everyone in this country.