anko Jones is NOT – to repeat, NOT – embracing EDM, nor is he going for a more synth-ed out, free jazz, old school hip-hop or new wave approach. He hasn’t visited the French avant-garde underground scene and come back with a revolutionary new approach and he doesn’t think that his days of shredding his fingers on his Gibson SG are far behind him. If anything, Danko Jones is doubling down on his guitar-centric new album Fire Music (out Feb. 10th via New Damage Records) raising the flag for hot women, fighting, and rock n’ roll.

After 17 years of touring the world, playing alongside oddball and mainstream acts alike, Danko Jones have stayed true to their roots. They have stayed the course making foot-stomping, rock n’ roll crowd-pleasers with each new album in an industry hellbent on compartmentalizing itself.

In this conversation, Jones set aside any pleasantries to speak his mind on the creative process, the differences between playing at home and abroad, his steadfast rig, indie rock pretense and Nickelback haters.

Having played stages all over the world, you’ve become a diplomat of sorts for Canadian rock. How do you think it’s perceived abroad?

I don’t know that this country has a serious international image, to be honest. When we mention we’re from Canada, they just kneejerk to RUSH. People just aren’t grouping it all into some sort of national scene the way they did with, say Scandinavian rock. The identity doesn’t go hand-in-hand with the sound.

I guess that speaks to the diversity of the music scene in this country. You wouldn’t lump Danko Jones in with the Arcade Fire, right?

Some of the heaviest bands in the country are all killing it abroad, though. Just off the top of my head, I’ve seen Biblical, Dead Tired, The Mants, Chevy, Monster Truck, Blood Ceremony, Sons of Otis overseas, but you still can’t lump them all together. It’s more on the indie rock side of things – with bands like Broken Social Scene – where they’ve made a conscious effort to align themselves with friends in other bands, form a collective or group and then broadcast that out internationally.

How has your creative process for Fire Music changed since your last album?

Well, this is the first album to have Rich Knox on drums. Rich comes to us from Flash Lightning, so it’s great to have him on board. It was also amazing to reunite with our producer Eric Ratz [Ratz worked on 2000’s My Love is Bold]. He’s done incredible work with Monster Truck, Billy Talent and Cancer Bats, so the time was right to make a new record together. Other than that, the process was pretty similar. John [Calabrese] and I would get together, write the songs and bring loose concepts to Rich and we’d rehearse them until they were perfect.

How was working with Eric Ratz different from the other producers you’ve worked with?

Eric kept a strong focus on guitar sounds. It’s something that I thought was lacking on previous records. At the end of the day, Eric’s a rock guy and so while we were putting this together I felt like I was working with someone who was always on the same page.

Some bands mellow out or go experimental because they feel it’ll help them grow as artists. Have you ever felt any external (or internal) pressure to change your style?

The term ‘grow as artists’ is kryptonite for me. For a rock band to call themselves ‘an artist’ is really pretentious. We know what we are, we know our place and we do what we love. And what constitutes growth anyway? Is it adding a string section to try to sound more sophisticated? Is it slowing it down to add the illusion of wisdom and intelligence? I mean, who cares? I personally know a ton of musicians who get hung up on how to ‘grow as an artist’ but the truth is, we all just play a bunch of songs – verse / chorus / move on. 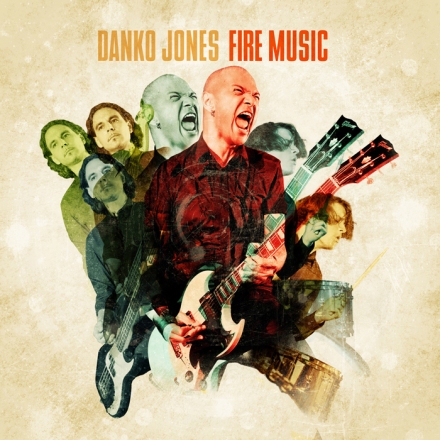 I would, but that’s because I can, for example, play a guitar solo with more confidence than when I started. I’ve learned how to sing, as opposed to screaming, the lyrics which has made me a lot more confident as a front man. When I was younger, I thought adding too much melody would make people think I was soft (laughs). But one day I was like “hey, Glenn Danzig does it – I should try it!” So yeah, we know more stuff now. We know more about writing and structuring our songs than we did back then, not to mention the production process. But all that said, I still wouldn’t call that ‘growth’. I’d just say that’s just improvement.

You stick with the songs you love writing.

Exactly. Every album we put out, there’s two stompy, mid tempo rockers. There’s a couple of fast, punk-influenced jams and then maybe a big rock and roll call-to-arms, but other than that we work within set confines. But within those confines, I find it challenging to find all new ways to do it.  I guess therein lies the art.

Well, being in a rock band, you can’t get by without listening to a lot of material by those guys, but it goes deeper than that. I listen to a lot of punk rock like Black Flag, the Buzzcocks. I’m also big on Thin Lizzy, Motorhead. Kool Keith and the Birthday Party.

See, I wouldn’t have expected you to have said those last two.

We have a song called Lovercall [from 2002’s Born A Lion] and on that song, the guitar solo is fully inspired by the work Rolland S. Howard did for the Birthday Party.

Some artists are very protective of the gear they use on stage (going so far as to hide their pedalboards from the crowd) but you’re pretty open about it. Why do you think some bands are so protective? Why aren’t you?

Maybe the reason they’re protective is because they think they’re unique. Here’s the thing: they really aren’t. The reason I don’t seem to care is because… I don’t. I’m not a gearhead. I’m going for a really basic sound – I’m just trying to get it to where all the songs I loved growing up hit me.  I’m a meat & potatoes type of guy. If there was a ‘meat and potatoes’ setting on my amp, it’d permanently be at that setting.

To that point, what’s your rig looking like these days?

It’s really not changed over the years. I’ve got a 100-watt Orange amp head, the classic Gibson S.G. guitar, a Durham Electronics Sex Drive pedal, BOSS tuner and away we go.

You’re no stranger to the European festival circuit. How are Euro festivals different from North American festivals?

European festivals are just so much more open in terms of booking. We played one festival where in one day (and on one stage) it was us, Erykah Badu, Slayer and Atari Teenage Riot. There was another one where it was us, Hatebreed, Entombed, Chris Kristofferson and Mary J. Blige on one stage. That’s the kind of thing Europeans are used to. Of course, you get Wacken Open Air in Germany or Hellfest in France which are both metal festivals but even with those there’s plenty of diversity. Like, we played Hellfest with Volbeat, Nashville Pussy, Opeth, Morbid Angel and KISS. For metal, that’s pretty diverse.

Now, with North American festivals, it’s all very exclusive and divisive, which is a reflection on how people here consume music. Here, it can be pretty socially damaging if you’re into metal and all your friends listen to Arcade Fire and Mumford and Sons. In Canada in particular, that kind of segmentation is actually encouraged with shit like the Polaris Prize. And nothing against you particularly, but I think music journalism plays right into that type of compartmentalized approach to music.

You toured pretty extensively with Nickelback several years ago. What would you like to say to the haters?

Which ones? I’ve dealt with two distinct groups: haters of Nickelback, and haters of the fact that we toured with Nickelback.

There are seriously two separate groups?

Yep. People fucking hate those guys. It’s real hate, too, which I’ll never understand. Some people say they’re formulaic, or that they’re the antithesis of artistry in rock and I get that. All I can say about our time on the road with them was that as an opener, nobody ever treated us as well as they did from beginning to end and that kind of stuff goes a long way with me. I don’t listen to their records, but our coolness doesn’t rest on the bands we tour with. We’re not going to tour with Nickelback and sound like Nickelback Jr. after it’s over. Actually, we got the opening slot on that tour because 3 of the bands they approached said no – as if they were somehow better than that. How insecure are you, where you’re saying ‘no’ to playing arenas every night for thousands of people, when there are bands out there who have trouble getting a dozen people to attend their show.  Like, shame on you and fuck you.

And seriously – you’re not unique for hating Nickelback. Honestly, how are you unique if everyone hates Nickelback? We have this propensity to not only define ourselves by the bands we love, but also the bands we hate and I’ll never understand that.