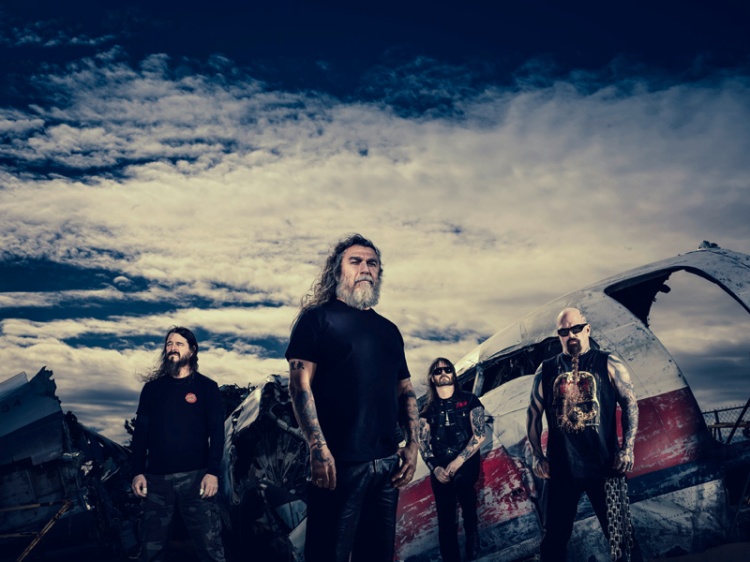 Slayer, Anthrax, and Death Angel will join forces this fall for a seven week North American tour.  The tour is slated to begin on September 9th in Cleveland, with the jaunt expected to wrap up on October 27th in El Paso.  Confirmed dates are below.

Said Slayer’s Kerry King, “It’s always super fun for us to tour with Anthrax.  Frank is one of my best friends in the biz!!  Put that together with Death Angel, and fans will probably see the best package this year.  See you there!”

Fans will hear their favorite Slayer songs from the band’s 30-year plus discography, as well as a few of the newer songs from Repentless.  Slayer and Anthrax stormed through Europe together last fall, amassing a string of sensational live reviews, so North American fans, this will be a night of metal music that should not be missed.

“We are very excited to tour again with our fellow Kings Slayer on a thrash/metal extravaganza,” said Anthrax’s Charlie Benante.  “Two of the Big Four – now that’s a night of metal for all the Kings and Queens!”

Added Mark Osegueda from Death Angel, “We are thrilled and honored to be part of this amazing North American touring package.  Slayer/Anthrax/Death Angel – it just looks, sounds and feels right.  This will be Death Angel’s first-ever tour with Slayer, something we’ve hungered for our entire career.  And we will bring that hunger to the stage every night, so get there early because this will be a show not to be missed; from the first note of the night until the very last! Metal is alive, hungry, thriving, and coming for you!”

With more dates to be announced, here is the confirmed itinerary:

* Slayer, Anthrax and Death Angel are all on this bill