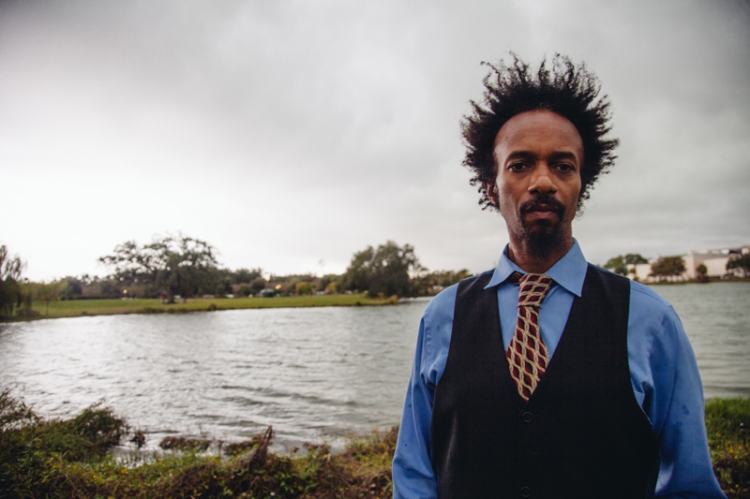 Fantastic Negrito is a man’s truth told in the form of black roots music. Each song the true story of a musician from Oakland who experienced the highs of a million dollar record deal, the lows of a near fatal car accident that put him in a coma, and is now in the phase of rebirth despite his playing hand being mangled. Negrito’s music emphasizes rawness and space. Rather than update the Delta Blues, Fantastic Negrito leaves the original sounds of Lead Belly and Skip James intact, building bridges to a modern sound with loops and samples of his own live instruments. But the primary element that drives Fantastic Negrito’s music is uncut realness and zero concern for “pop” anything.

Yesterday, the band held a press conference at the Bottlerock Music Festival in Napa Valley to discuss their new album, The Last Days of Oakland, due out June 3rd via Blackball Universe, the influence of Prince, and more.

What was your inspiration for your latest album?

Well, I’d say my latest inspiration is that, when I was travelling throughout the United States I noticed not just in Oakland-and I did a world tour. I did 43 cities in 45 days on four continents. And things have changed! We’re in a whole new era. Things have shifted. Specifically I think, in the USA, black populations have left the cities. If you grew up in your hometown, now you may not be able to afford to live in your hometown. I just felt like it was the end of something. You’d be a very sad person to keep trying to look for something that existed before. Especially in the city of Oakland with its rich culture. I thought, you know, when something ends something amazing is going to begin and that’s why I named the album The Last Days Of Oakland. And I tried to tackle some of those issues, to kinda be a bridge. I’m old enough to have grown up in the old Oakland, but now I’m an artist in the new Oakland, so I wanna be the bridge to say Hey, people from the old Oakland stop complaining. This can be great. We can make this work. And I say to the new people in Oakland Hey, this city is cool for a reason. Some people made this shit cool. People lost their lives, terrible things happened, and then some great things happened. Usually from the darkness comes the light. Usually from tragedy comes great art. So I want the new people to just acknowledge that, and know why it’s cool. Cuz it ain’t cool just because you moved here. And I think that’s kind of pervasive throughout everywhere I was going. New Orleans is when I came up with it, The Last Days Of Oakland. I was like, Whoa! Things have changed.

If you hadn’t had your coma and woke up with that revelation, and then you were dropped by Interscope, do you think you would be where you are today?

Yes, I think so because the journey of life, no matter how tragic or triumphant, that’s what makes everyone in this room. We’ve all travelled on that road of whatever that is and all of our experiences shape and define who we are. If you allow it. If you fight it then you’re in trouble. I know cause I fought it a lot, so I speak from my massive failures.

What would you say is your biggest dichotomy as an artist?

I would say I always call myself a recovering narcissist, and it’s true. That shit has taken me off cliffs before. But I’m also very giving and loving, so it’s kind of a bizarre duality. I was the 8th of 14 kids so I think that kinda laid the ground work of being a narcissist. At 12 years old I ran away and I never came back. Because I needed something and I think we’re all different. I really needed something and I couldn’t get it at home. So I think that being this kind of self-absorbed maniac and then, you know my best friend told me “I know you’d give me the shirt off your back but you’re crazy.”

Where did you get the idea of putting “Negrito” in your name?

I love this question because I told myself, I would call myself Fantastic Negrito. You hear that, in South Central and east Oakland in the Mexican songs. So it was just kinda in my consciousness. And when I discovered black roots music, which I ignored all my life, geniuses like Skip James, Charley Patton, and Robert Johnson, I told myself I would call myself Fantastic Negrito so that every time someone asked me about my name I could say those names so that people would understand the genius of that music. That music came from an extremely profound struggle and it’s really shaped pop culture, world culture. I feel like Robert Johnson was an MC when you listen to his lyrics it’s like damn this dude was an MC in 1920. And so many people got wealthy off them that when you say Fantastic Negrito I can talk about those guys.

So we’ve had this horrific loss of Prince and I know some of your music has influences from him. How does that feel to you as an artist and the future of music?

I was playing with Chris Cornell in Paris when I heard about Prince’s death, which is tragic. He was such a teacher and gave so much to the world, music community. Especially myself, growing up as a youngster in Oakland there was so much danger out there. My best friend was killed, my little brother was killed, I could go down a list. So I remember always being this oddball. I was the oddest dude in Oakland. I wasn’t a musician but I’d wear leopard-skin cowboy boots and orange pants and like these huge hats. And people would just fall over laughing at me in the hoods. But then, when I saw Prince I thought Oh, there’s another brother that’s different. I became empowered, just by his imagery. Later I became a musician and starting out I thought well “What did Prince do?” Well he taught himself so then I taught myself. He was my childhood hero, and I owe him a lot.

What is your single biggest piece of advice to a musician?

Be honest. The world needs you, especially in the times we’re living in now. We’ve probably lived through these times a thousand times. “The times we’re living in!” People always say that. You know, I call America the great pendulum. We swung over here to electing Barack Obama it feels great! Look a black man is president with his black wife and his black children and there are no barbecues on the White House lawn. Everybody felt good. But then, the pendulum swings back. Boom. Donald Trump. “We’re scared! We’re scared of everybody!”

Artists, this is your time. Your leaders, your politicians, they’re self-serving. They don’t give a damn. People look to artists to be the flashlight, show the light. When I was in Birmingham I played a little English pub and I got some great advice from Robert Plant. He came out to my show and he was talking about people with their thumbs up their own asses. Artists with Facebook, and Tumblr. So that was some great advice from a giant, that I now give to you.