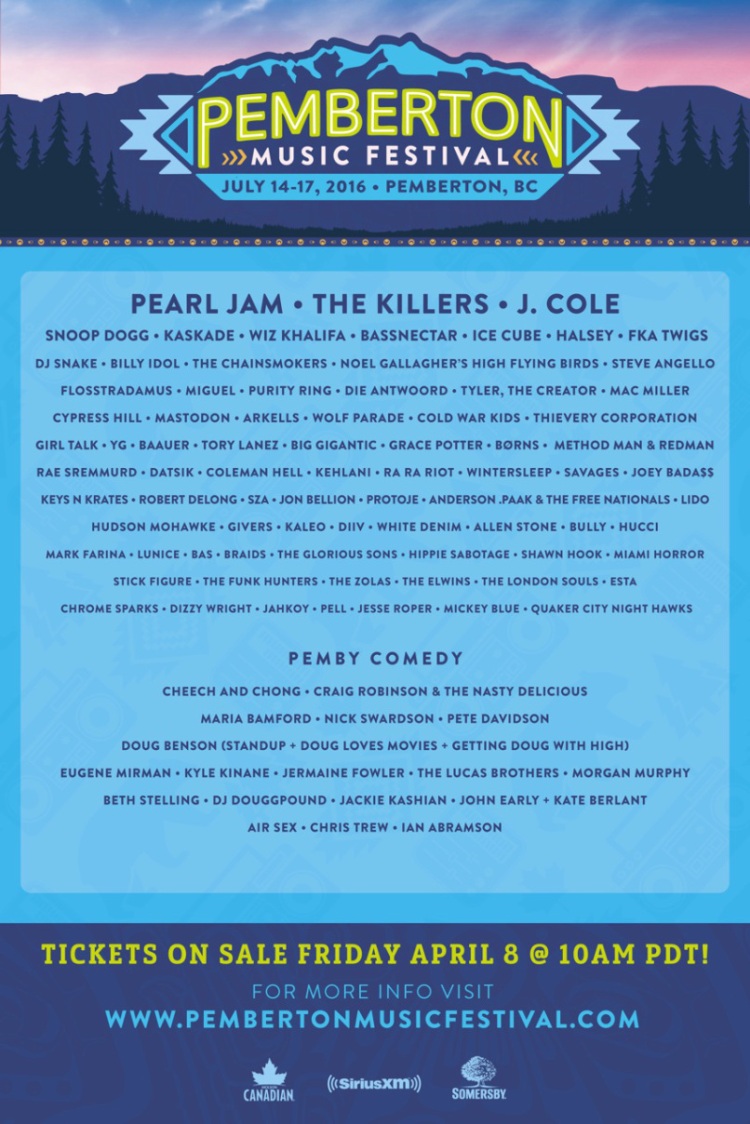 Welcome to Pemberton Music Festival, aka the best weekend of your life. Join the adventure at this year’s festival, set for Thursday, July 14 through Sunday, July 17, 2016.

Whether you’re camping under the stars or having us chauffeur you around in our comfy shuttles, come experience 4 epic days of music, comedy, food and arts underneath majestic Mt. Currie.

Don’t believe us? See for yourself!

With over 25 years worth of live performances, ten studio albums, and hundreds of official live concert bootleg releases later, Pearl Jam continue to be critically acclaimed and commercially successful — with over 60 million albums sold worldwide.

Their newest album, 2013’s Grammy Award-winning, Lightning Bolt, debuted at #1 on the Billboard Top 200 chart as well as #1 on iTunes in over 50 countries, and is another solid addition to the Seattle’s quintet already impressive legacy.

If you’re curious as to why they’ve been hailed as one of the best live bands around, don’t miss them at Pemberton this summer.

Crafting ethereal electronic R&B that evokes the heyday of Tricky and Massive Attack and the spare 2010s aesthetic of the xx, London’s FKA twigs is the project of Twigs, aka Tahliah Barnett, a half-Jamaican native of Gloucestershire.

Her newest release, M3LL155X, was co-produced by Beyonce collaborator Boots, and was accompanied by a 16-minute short film. If you want an artist that will pull you out of your comfort zone, don’t miss FKA Twigs at Pemberton 2016!

The chilly electro-pop project of Corin Roddick and Megan James, Purity Ring began when the two were in Canadian indie rock act Gobble Gobble (which later became Born Gold). While the band was on tour, Roddick and James grew increasingly inspired by the sounds of contemporary R&B and wanted to make music reflecting that.

After touring in support of their debut album, Shrines, Roddick and James began making new music, this time working together in person in Edmonton instead of collaborating online as they had on their debut. The results were 2015’s Another Eternity, a dynamic, streamlined set of songs featuring more revealing lyrics from James and Roddick’s hip-hop-inspired production.

If you want to hear the perfect mix of electronic music and R&B, catch Purity Ring at Pemberton 2016!

Produced by Joe Chiccarelli (The Strokes, My Morning Jacket), Tony Hoffer (Beck, M83), Brian West (Sia, Awolnation), and Gus van Go (The Stills, Wintersleep), the album is comprised of click-tracked rhythms, subliminal samples, and electronic pulses – threaded together with horns and strings into a richly-textured mix which more readily recalls montage and collage approaches of hip-hop beatmakers than the direct plug-in-and-play attack of a live rock band.

Wolf Parade is back following a five-year hiatus, which included a series of residency shows in North America and the UK back in May and June.

Wolf Parade formed in Montreal in 2004, where the band’s first show saw them opening for Arcade Fire. From there, bandmates Dan Boeckner, Spencer Krug, Hadji Bakara, and Arlen Thompson have since released three studio albums, four EPs, and six singles. If you want to hear a band that has mastered championed the marriage of post-punk and indie rock, see Wolf Parade at Pemberton 2016!