5 Must-See Artists at Reading and Leeds 2016 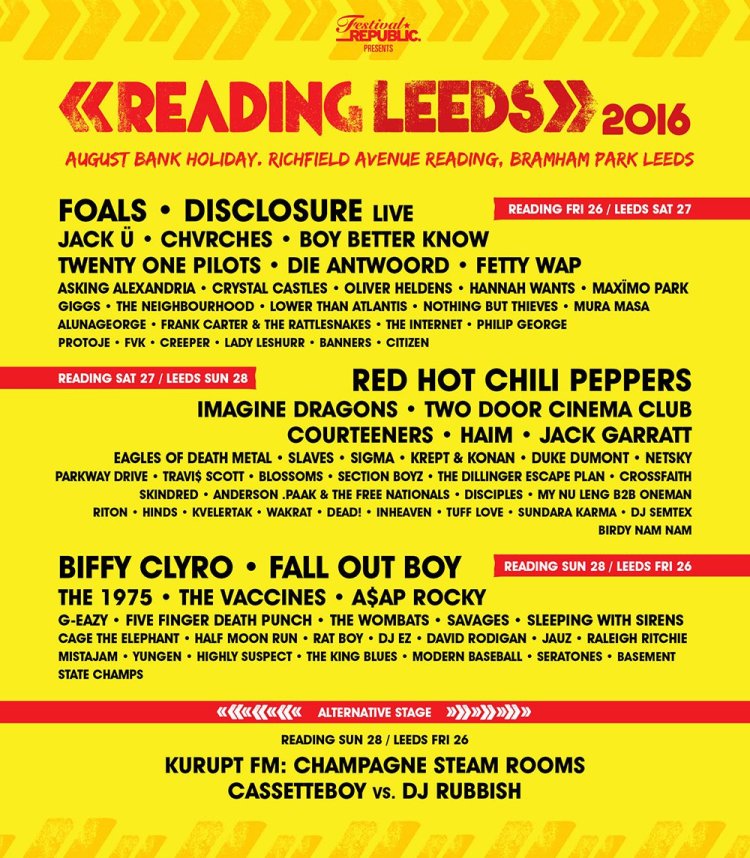 The infamous Reading & Leeds Festival is heralded as the best music show on the planet. With the most revered artists from across the globe playing each year across the August Bank Holiday weekend, it is a genuine rite of passage for discerning music lovers everywhere.

From headliners including Red Hot Chili Peppers, Biffy Clyro, Fall Out Boy, Foals, and Disclosure, to other artists including: Imagine Dragons, Two Door Cinema Club, The 1975, ASAP Rocky, Jack U, and CHVRCHES, there’s a sound for everyone at this year’s festival.

Citing influences as diverse as Tears For Fears’ Songs From The Big Chair album, DJ Arca and Deafheaven, Simon Neil has described Ellipsis as “more of a punch to the nose than a big cuddle.” Lyrically, the album’s songs tackle personal issues with the idea of “fighting back” a recurring theme.

Such themes are also apparent in the album’s visceral first single “Wolves of Winter” which captures Biffy Clyro’s famous blend of angular riffs, pummelling rhythms and strident hooks. Says the UK trio: “’Wolves of Winter’ is about us being wolves on a patch and if you come onto that patch, we’ll tear you limb-­from-­limb.”

“I feel like this record is my definitive statement, a summation of the first five records,” Turner says. “When a band makes a debut record, there’s a freshness and excitement to it that bands often lose as time goes by. I wanted to make a record with that young, exciting feel.” After a period of writing and perfecting the songs at a rehearsal studio in England, they headed to the US to work with Walker for an intense nine-day recording session. “Pretty much all of it is live,” Turner says. “The end result is everything I wanted it to be.”

Their new song “Cop Vs. Phone Girl” takes a mid tempo, rhythmic sing along to tap on police brutality and race that is both up nightmarish and uplifting. Written by frontman Stephan Jenkins, the song’s impact is all the more intense because the absurdity that it depicts is an accounting of an actual assault. In a testament to Jenkins’ songwriting mastery, he still finds a way to chide hope into a dark narrative, and creates something anthemic out of viscously specific details.

Third Eye Blind gained wide success at the end of the recording industry golden age. Their endurance and ability to adapt through the digital revolution speaks to the ingenuity and creativity found in the music. After four smash albums and millions of records sold worldwide, they continue to write, record and tour, entertaining their core audience while growing a larger, younger and more dedicated fanbase than ever. The band now work and communicate in a fluid new world where their music continues to naturally evolve. Their exchange with their audience is unfiltered, and being from the hub of the digital space, they are using it to develop a closer exchange with their audience.

The all-female post-punk four-piece Savages recall the tenacity and more artistic movements of London’s punk heyday with their blistering sound and noisy guitars.

Hailing from the English capital, they formed at the end of 2011 after guitarist Gemma Thompson and singer Camille Berthomier — known as Jehnny Beth — had procrastinated over a name and starting a band until they eventually settled on Savages and set to work writing songs.

Soon after, Ayse Hassan joined on bass and Fay Milton completed the lineup on drums. Soon after their formation, Savages performed their first show in January 2012, supporting rock outfit British Sea Power. They were then picked up by Sigur Rós manager John Best and released a double-A-side single, “Flying to Berlin/Husbands”, through indie label Pop Noir. The single attracted attention from various music publications, where they were favorably compared to luminaries Public Image Ltd., Siouxsie and the Banshees, and PJ Harvey.

Further raucous live performances ignited the band’s rise, with a successful appearance at the New York-based CMJ Music Marathon and on Later…With Jools Holland in the U.K. A whirlwind year was capped off with the quartet’s nomination for the BBC Sound of 2013 award. Another single, “I Am Here”, was also released in 2012, and Savages partnered with Matador Records to release their debut album, Silence Yourself, in May 2013. The band followed it up with their new album, Adore Life, which drew comparison to Swans, Soundgarden, and once again, PJ Harvey.

Formed in Oxford, England, by longtime friends Yannis Philippakis (guitar) and Jack Bevan (drums), along with Andrew Mears on vocals, guitarist Jimmy Smith, and bassist Walter Gervers, Foals — whose name is a play on the etymology of Philippakis’ name — began as a way to protest against the proggier sounds that were both popular in Oxford and in Philippakis and Bevan’s former band, the Edmund Fitzgerald.

Their new album, What Went Down, is an album that grapples with questions that are a world away from the bland bleatings of homogenised pop: permanence and impermanence; life and death; solitude; vulnerability; intimacy; passion; rage; humanity – weighty issues that make demands of the people creating that music, and of all those who listen to it, too.

Sonically, it’s an album that precariously seesaws between primal aggression and naked vulnerability. It’s an approach that delivers a contrast of muscular shocks with the fiery central riff of “Snake Oil” and the menacing percussive march of “Albatross” set against some of the band’s most openly experimentally moments to date such as cocktail of afrobeat and drum machines that underpins “Night Swimmers” and the stripped-back, vocal-led “Give It All”.

The album closes on an astonishingly beautiful note with “A Knife in the Ocean”, akin to both the calm before the storm, but also the stillness and silence after it has passed.