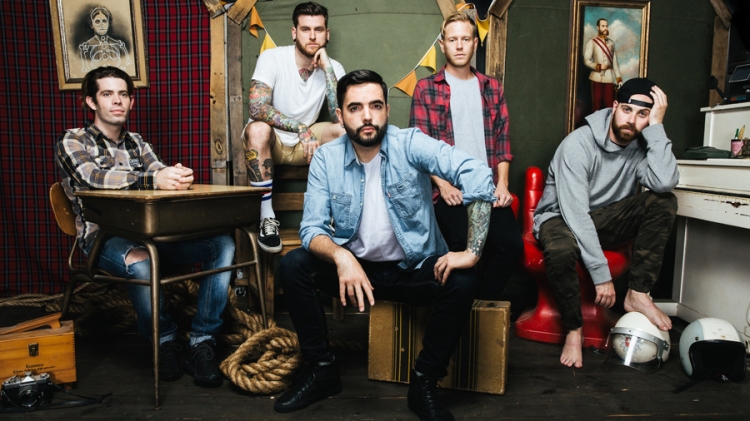 M etalcore favourites A Day To Remember are back with their new album, Bad Vibrations. A Day To Remember (vocalist Jeremy McKinnon, guitarists Kevin Skaff and Neil Westfall, bassist Joshua Woodard and drummer Alex Shelnutt) recorded Bad Vibrations with producers Bill Stevenson (Descendents, Black Flag) and Jason Livermore (Rise Against, NOFX). Released on the band’s own ADTR Records and distributed by Epitaph, the album was mixed by Grammy winner Andy Wallace (Foo Fighters, Slayer) and is the follow-up to 2013’s Common Courtesy.

The quintet has hit the road with Blink-182 for a summer tour of arenas and sheds, which kicked off on July 21st at Viejas Arena in San Diego, CA, and will wrap up on October 1st at The Forum in Los Angeles.

You guys have moved out of Jeremy [McKinnon]’s home studio, into a more of an isolated environment in the cabin in the woods. How did the isolation of that environment impact the writing and recording process?

Neil Westfall: Just completely different, because when we did it at Jeremy’s house we could just be like “I gotta go home and take a poop, I gotta feed the dog or something.”

Kevin Skaff: You could just literally drive your car home for however long you wanted and never come back.

It was a more relaxed environment, right?

Westfall: Yeah, so it was bad because you never got anything done. What should’ve taken two months ended up taking a year. This one it was like we were in there for three months and we probably did the same amount of work that if we were at home it would’ve taken like three years. We were in there every day and we’d write two songs every day and work our asses off to just bang it out.

Westfall: We’d wake up, get breakfast or eat or whatever, then we’d go and work until it was time to eat lunch, then we’d take a break and we’d come back and work ‘till it was bedtime pretty much (laughs). You’d be so tired that you’d go home and legitimately pass out and wake up to do it all again for about a month and a half.

Skaff: It was like songwriting boot camp. It was wild.

So what have you guys been listening to lately? Does your playlist usually differ between being at home as to being on the road?

Skaff: I listen to weird… not like weird music, but just music that has nothing to do with this world. Chris Stapleton, Jason Isbell, Kacey Musgraves and stuff.

Westfall: I think being at home definitely differs because I can listen to the stuff that I would prefer to listen to, where as when you’re on the road you’re picking for a group of people. On tour we listen to a lot of rap and a lot of club bangers. We also listen to punk, we have two kinds of playlists to get ready for a show. A punk playlist which is a lot of rock and hardcore, then the other one is just straight rap like you’re in a fucking club. 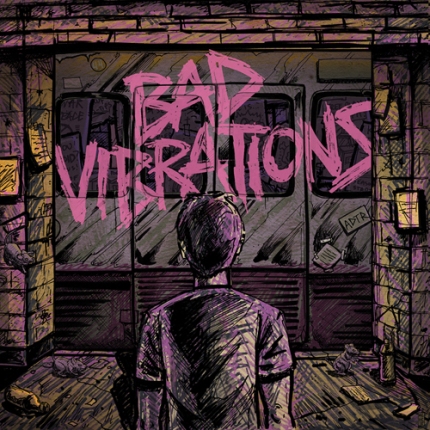 A Day To Remember released their new album, Bad Vibrations, on August 19th.

Working with Bill [Stevenson] and Jason [Livermore] who’ve worked with tons of iconic punk bands, what was that like?

Skaff: It was pretty rad, we went in there not really knowing what to expect. We picked them because we really liked the sonic sounds that they got on a lot of records they worked on and records that we were aware of.

Going in there it wasn’t that we didn’t understand their legacy, but it wasn’t understood to the point where we were fan boy-ing out on them. We went in there and we’d tell them we didn’t like their ideas, they’d tell us they didn’t like our ideas and whatever, it was a cool relationship. When I got home I watched Filmage, the Descendents DVD and I was like “fuck, that’s Bill! That’s our guy.” I was like man, I’m so glad I didn’t watch this before. I would’ve not been able to talk or say my opinions, because [I’d] feel like they’re not worthy. It was awesome, they really did a great job.

Westfall: What was funny about them too is they don’t actually tell you very much. It was like “yeah, it was good. Nah, maybe not.” Stuff like that and we were just like “man, do these guys even like our album?” After we left Bill had said that it’s one of his favourite albums he’s ever worked on. In the AP they interviewed both Bill and Jason and I forget if it was Bill or Jason, but they were stoked to see a band at our level working as hard as we work. They said that bands don’t usually do that. It was a cool compliment to see from them after all was said and done, because they’re legends.

So this record sort of serves as the first in a while where you’ve almost played it live as opposed to more technology. How did it feel going into that live setting as opposed to relying on technology to make a record?

Skaff: It was awesome because we got to feel the songs out before hand and see what actually worked or didn’t work. It was fun because getting frustrated in front of a computer is so much more frustrating than sitting in a chair with your guitar on. You’re actually able to work it out on guitar or with your band, versus just being in front of a stupid computer.

Westfall: Literally where someone else is in control of what gets done and what doesn’t get done. This is like you’re in control because you’re like “let’s do it, let’s fix it.” It’s awesome, I think. I would advocate it. It’s more fun. You get to do what you love. You play your instrument for 10 hours a day. It’s a lot, but you get so much better and it’s more fun.

Say someone had never heard of you guys, what album or what songs would you tell them to play to get into you, to get familiar.

Westfall: I honestly would tell them to come see us live. We work really hard on putting together a set list that can encompass all of what our band is, as well as playing the popular songs that tons of people enjoy. So I would say if you could, to come check us out, I think our live show encompasses everything that is our band. We really enjoy putting on a good show, letting people escape from everyday life as well as not taking ourselves too seriously and just having a good time.

As soon as I heard what the album was called, I instantly harkened back to the Beach Boys, was that an intentional thing?

Skaff: It wasn’t, it was just a lyric in one of the songs and it was the name of the song. It was the last song we finished and we were like this has gotta be it. Jeremy’s like “I’ve got a couple ideas, the first one is this,” and we were just like “yes.” It was literally that easy. Our manager was like “well they could use that name in reviews to make hilarious jokes about you.” We were like who cares?

In terms of reviews and that sort of thing, at this stage in your career, do you read your own reviews? Is that something you care about at this point anymore?

Westfall: Some people do, they read every comment, every review, every word written. What sucks too is that the people who do read the comments, they only take the negative comments. There’s 1,000 comments and three are bad. “Man we have to change our whole set list now,” it’s like no, we don’t. Stop reading that bullshit.

Congrats on that new single “Naivety,” which came out on August 19th. What was the inspiration behind that track?

Westfall: That was just being in Bill’s studio to be honest with you. It’s like an ode or an homage to that era of punk rock. I think that was a lot of just being there in that studio. I was just playing this chorus that I was writing on a couch and Jeremy’s like what is that, then we changed it and it became that. That was a really quick one.

Have you heard the new Blink-182 record, California?

Westfall: Yeah, we get to hear it almost every night.

Do you have a favourite tracks?

Westfall: “Cynical” definitely. “Only Thing That Matters,” that one is probably one of my favourites. I also like “Kings of the Weekend.”

Skaff: “Bored To Death” is good too.

In terms of their discography, if you had to choose a favourite Blink-182 album, what would you go with?

Westfall: I would say Take Off Your Pants and Jacket is my favourite.

Skaff: I’m going to go with Enema of the State, with Dude Ranch as a really close [second].

Obviously they’ve influenced you a ton, are there any other bands with as much influence as them when you were growing up?

Now that you’ve crossed opening for Blink off the bucket list, are there any other bands?

Skaff: Go live in a cabin somewhere and die, nothing worse for me to do. Eat these spaghetti-o’s until I die. I’m done, seen it. Thank god we finished another album before this.

Westfall: I don’t know Foo Fighters would be fun. Green Day, Foo Fighters, Metallica. I want to play with Metallica after that new song just came out.

With contributions by Lucy Sky

« Photos: Korn, Rob Zombie @ Molson Amphitheatre
Photos: Minus The Bear, This Will Destroy You, Seven Nines And Tens @ Venue »