Interview: Deaf Havana Talks “All These Countless Nights”, BBQing with Metallica, and Opening for Springsteen 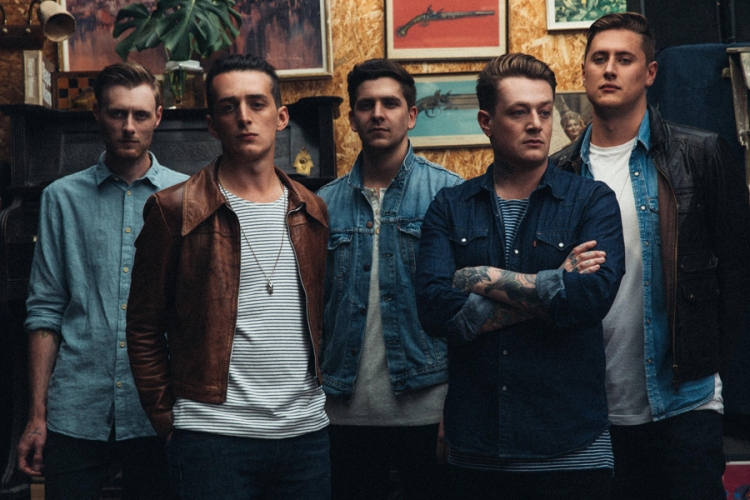 UK alt-rock band Deaf Havana catapulted into the rock big league with their smash hit 2013 album, Old Souls. It crashed into the Top 10 of the UK Albums Chart, earned rave reviews, and saw the band sell out ever bigger venues, appear higher up the bill at festivals and even support frontman James Veck-Gilodi’s hero, Bruce Springsteen.

But, behind the scenes, the band were experiencing financial problems and a lack of internal communication that almost broke them.

Veck-Gilodi planned to use the band’s 2014 Reading & Leeds performance to pay off the band’s debts and act as its swan song. But some sideshows reminded him of how much he – and Deaf Havana’s still-burgeoning fanbase – enjoyed his band. A sudden burst of inspired songwriting followed.

The end result, Veck-Gilodi declares, is Deaf Havana’s most eclectic and expansive album yet. Having cleared house internally in the months leading up to recording of their new album, All These Countless Nights, taking on new management and signing to a new record label, the band are already benefitting from the new energy that brings. They’re communicating better with each other, they’re involved in every aspect of the band’s affairs, and they’re ready for whatever the world of rock wants to throw at them.

In our new interview, Veck-Gilodi talks the making of All These Countless Nights, how Deaf Havana were on the brink of collapse due to financial problems, opening for Bruce Springsteen, and more!

Prior to writing the songs that appear on All These Countless Nights, you were very close to quitting the band. What was going through your mind at the time?

I think I was just sick of it, sick of having no money, sick of falling out with my best friends. I was not very well, mentally at the time and it really affected us as a band.

At the time, you guys were experiencing some financial problems, and there was a lack of communication between you. How did those factors impact the band dynamic?

They were everything, they just drove us into the ground really. It was weighing on our minds every day, we started falling out with each other over the smallest things. It was a very volatile and tense environment for a while.

How involved were you and band in your financial decisions? Has that changed this time around?

We had almost no involvement whatsoever, well at least I didn’t. I was very ignorant to it all and I kind of shied away from that aspect of the band. I always thought that if I didn’t think about it or look at our accounts, then we would have an endless pot of money. Clearly we didn’t, haha. This time we basically just want to be in control of everything, this is our business after all, so we have a much healthier approach now.

Deaf Havana will release their new album, All These Countless Nights, on January 27th.

Take me back to 2014 when you planned to use the band’s 2014 Reading & Leeds performance to pay off the band’s debts and act as its swan song. What inspired you to keep going?

I think we all just realised that we still loved playing together and that it was something we weren’t ready to give up yet. We still had a large period of time where we didn’t really talk after that, and things were still kind of rocky, but ultimately I think that is what sparked it back into motion.

In terms of the writing and recording process for the new album, how did it compare to that of Old Souls?

It was considerably more natural. For Old Souls me and my brother wrote all the songs in a period of about a month, and then went straight into the studio. With the new record, I wrote the songs over a period of about three years and we condensed them down into album worthy versions, before even booking studio time so we were much more ready and focused when we finally recorded them. Also having Adam Noble working alongside us the whole time helped hugely, he and I are on the same wave length musically and it was just a much more focused process.

When you were writing for this album, did you make a conscious decision to try to reinvent your sound and the direction ofthe band?

Not at all, for Old Souls we did, but with this one I just wrote songs that felt natural and didn’t try to steer them in any particular direction.

Four years is a huge gap between albums. Why did fans have to wait so long for a new album?

None of us were ready, at the point where we should have released this record, I was still questioning whether I even wanted to keep doing this. Without that time away from each other and away from this band I don’t think we would have had the chance to mature as a band and as people, something which we definitely needed to do in order to carry this on.

You got to open for one of your major influences, Bruce Springsteen. What was that like?

Mind blowing really, he’s one of my all time favourite artists. It was pretty surreal watching him play later that day, knowing that we’d opened up for him. I didn’t get to meet him but my brother did, I think I would’ve choked up if I did anyway haha

I read in another interview that when you were in Australia James Hatfield from Metallica introduced himself to you. How surreal was that?

Yeah that was pretty surreal too haha Basically it was a festival called soundwave and Metallica were hosting a BBQ for all the bands. He obviously didn’t know who we were, I think he was just being polite. We were super jet lagged too so it was a pretty bizarre experience nevertheless, haha.