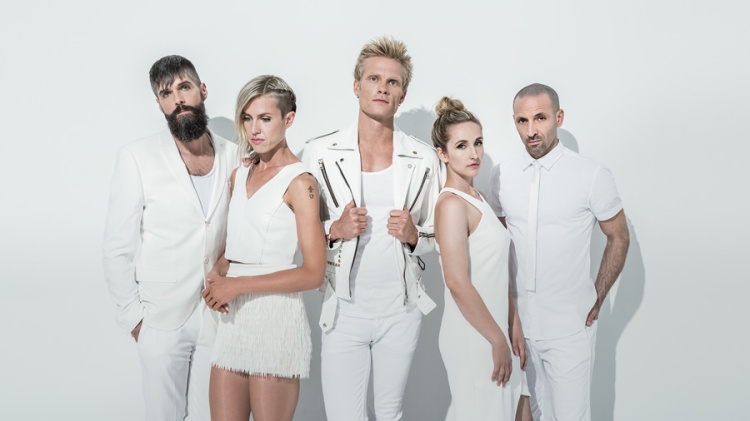 With the world roiled by fear and division borne out of politics, economic uncertainty, and terrorism, perhaps there is no better time for the arrival of music underpinned by the belief that love wins. Into the maw of anxiety comes Mother Mother with No Culture (out Feb. 10th via Universal Music Canada), which posits that society uses negative byproducts of culture — such as narcissism, hedonism, and addiction — as a means to nurture its fears of the unknown.

With tracks like “Baby Boy”, lead singer Ryan Guldemond treats the verses as a confessional box, admitting his penchant for self-destruction, deceit, and diehard adolescence, while Molly Guldemond (his sister, fellow founding member, and designer of all of the band’s album art) takes the lead with a melodic intervention, “baby boy, baby brother, we’re losing you to the gutter”.  The idea of lineage and relationships really comes through on the closing track “Family” where Molly and Ryan harmonize on an endearing account of the idiosyncrasies and unconditionality inherent to kinship. “The Drugs”, the band’s driving first single is an address to a lover, deeming her the ultimate high and antidepressant, while “Letter”, Mother Mother’s first piano ballad, nostalgically recruits the age old theme of unrequited love by way of handwritten loneliness.

In our new interview, Mother Mother frontman Ryan Guldemond discusses the making of No Culture, the importance of artistic authenticity, how it feels to play an iconic venue like Massey Hall, and more!

The video for “The Drugs” uses a really stylized black and white look. How did the concept come about?

That was born out of the album aesthetic, and the album cover, which meant to symbolize a state of beginning or blankness being tainted by external influences. So that sort of gave birth to the theme of black and white, with much of the record being about the concept of identity, and it being something that is formed over time and as a byproduct of things that have happened to you. Not so much because of your essence.

Yeah, because when I first saw the album cover, I thought about how society sort of imprints on us as individuals, like once we are born, right?

With the album title, does that entwine how culture negatively influences us sometimes?

Yeah, it is using the word culture in a projective sense, it’s suggesting that we get away from ourselves at time goes on and we lose touch with our own humanity and nature. And the perception is to strip away and remove your cultural influence as a means to return.

How would you compare the creative process of your last album Very Good Bad Thing to that of No Culture?

This time around things happened in a more pressurized fashion, which I think made for a more cohesive sentiment. The music was produced from an emotional space, it wasn’t drawn from different chapters in life because sometimes you can just sort of pull from the archives and sort of piece together an album. It was a byproduct of focused, emotional intention.

That was an M.O. to I guess do away with superfluidity, and to make everything count. Make every motif count, every word count, and have tight architecture.

You guys had some personnel changes last fall when Jeremy left. How did that impact the band’s dynamic?

Oh drastically, it’s always a shock when someone who you’ve regarded as family… is gone. Yeah, but you know you work through that and you remember what it is you’re doing and that is moving forward in the context of a band, that has an agenda and you know, your grieving takes place in its natural form, and you carry on. Yeah, there’s not a whole lot to be said.

But do you guys feel that you are more of a cohesive unit now?

Well, I think that whenever there is a personnel shakeup it’s for a reason and it steers to truth. So, yes I would say it happened for its reasons and then today, I think everyone involved is probably exiting closer to their truth.

“Letter” serves as your first piano ballad. How liberating was it for you to be able to experiment with different sounds?

It always is every record, I feel that is something to dabble in. With the expansion of textures and technology. And with “Letter” it is a nice dichotomy, it is a piano ballad which is a classic proposition but it does have a lot of modern production infiltrating it. But, it’s always nice to tackle new equations in the studio.

Mother Mother will release their new album, No Culture, on Feb. 10th via Universal Music Canada.

So over this span of sixth albums, have you ever felt that going into every new record, that fans expect a certain sound from you?

I try not to worry about what fans expect, in terms of any sonic aesthetic. But I know that people want great songs, that’s one thing I know. During the production value, you’re never going to please everybody. Someone’s going to say ‘I wish it was more raw’. Someone will say ‘I wish it was more dense’. But I think both parties will react to a great song. So that’s where I try to focus most of my attention. It’s just on the fiber of the music, the quality of lyric and melody.

And in addition to fans wanting great songs, they also want authenticity. And they can tell if you’re not being authentic in your music.

Authenticity is as old as anything. And is detectable as it ever was. So, yeah I fully agree that it’s important in music and art, and emotional expression of any kind, whether you’re speaking to someone about your feelings or their feelings, or delivering a song, it needs to be true and genuine.

There was a three-year gap between Very Good Bad Thing, and No Culture. Was this a conscious decision to not rush yourselves?

That is a going rate of time, I mean that’s natural. We’ve sort of put out records like clockwork every two years for the past 12 years. So, this record was pushed a few months for a few logistical record label reasons, but I don’t feel that we necessarily took more time than we usually do. Yeah, I mean if you look back they’ve come out at about the same time from one to the next.

Yeah! I feel like we just had to work as we always do, you know, the writing phase comes around quickly. The touring and bam, it’s like you gotta make another record. It’s like okay I have to dig into my soul and find a legitimate pathway.

In terms of how fans consume music now, which is mostly by song, does that promote any anxiety in you as an artist?

No, not really. I mean…we make a record for record’s sake. It has it’s peaks and valleys. But invariably, whether you try to or not, you do have your stand out tracks that can exist unto themselves. That’s always been the case, that’s always been the way it’s been a before it was a singles market even when the album has a modern dimensional piece of art was the norm, you still had your hits on the album. Like people were still drawn to one or two songs, if we are speaking of the masses. And I think that’s just an odd’s game in writing music, you’re not going to write your best song 12 times.

Yeah, exactly. You’re lucky if you do, yeah I think it’s a nonissue the singles-driven market. For me, that’s how I feel.

This is the first album since 2012’s The Sticks that you had a hand in producing. How have you evolved as a producer since that time?

Yeah, I stepped back in production for that thing. I would say, I am more objective. Yeah, it’s nice to not find yourself repeating tricks, As you get older.

Have you become more confident being in the studio as the producer instead of just a member of the band?

Totally, yeah, I mean it’s also a certain, confidence born out of humility in a sense, when you can kind of remove yourself and honor the whimsical nature of how ideas come into being in the studio. It’s a better experience when it becomes less personal, and you get out of the way of fruition and I feel that I am better at that now. Sometimes, in the early days, you have a lot to prove and, so you try and catalyze great ideas. Instead of allowing them to show themselves and then simply guide them.

You’re bringing No Culture to Massey Hall in Toronto on March 11th. Have you played there before?

Yeah, we played there ages ago opening up for Matthew Good.

Oh yeah! So what’s it like to take the next step and headlining there?

It’s quite an honor, yeah, it’s a real staple to Canada, let alone Toronto. I feel it’s an induction of sorts or a right of passage. But you know, you try and not let that get in your psyche and ruin the gig.