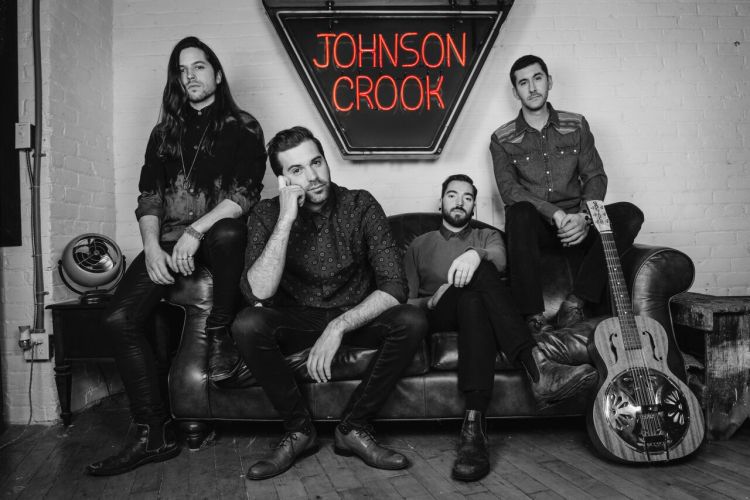 Fresh on the heels of their harmony-rich roots-rock self-titled EP, Johnson Crook is back with the release of their debut full-length record, aptly titled, The Album. Released on August 4th via Coalition Music, the album encapsulates a whirlwind initial two years of live gigs and recording sessions that began almost immediately after the members’ first encounter.

From the moment the members of Johnson Crook played together, they knew they not only had harmony in their voices, but a deep personal connection that made the idea of forming a group a foregone conclusion. What the quartet shares is a love of pure, honest music stemming from their small-town backgrounds. Drawing inspiration from groups like the Eagles and the Avett Brothers, each member of Johnson Crook contributes equally, injecting their unique personalities into the overall sound.

In our new interview, Noel Johnson discusses the making of The Album, their favourite CNE foods and rides, what it was like to record with Tom Cochrane, and more!

What was the writing/recording process like for The Album?

Writing for The Album was a lot of fun. We took our time trying to craft songs that spoke to us lyrically and melodically. We would write with all four us together, just two or three of us, or sometimes just one person bringing a song to the table. Recording was a long process but equally rewarding. We recorded a majority of “The Album” at Metalworks Studios, with additional recording at our Producer, Bill Bell’s house.

What prompted you to call it The Album?

When it came to naming the album we felt that there was no one song title on the record that could encapsulate the entire record. All through the recording process we would refer to the album as “The Album”, so we thought “Why not just call it that?”. We also had the album art and CD designed to look like an old photo album and tie it all in together.

How do your small-town backgrounds influence you musically?

Personally for me growing up in Cochrane/AB, country music was always a staple in the community. It wasn’t until I moved away from home did I start wanting to write songs rooted in country. From a creative perspective there’s so many characters in a small town, lots of hardship, but lots of humour. People in small towns tend to take things less seriously, and that lightheartedness is pretty key to the songwriting.

The songs that appear on The Album came from a larger batch of 25 songs.  What made these 12 songs stand out to you enough to include them on the album?

It was a tough call to give some songs the axe. All of us really want to get a few of them on the next record if we can. What it came down to was a couple of things, first being asking ourselves “Do I want to hear this song on repeat?”. Some songs had that immediate emotional response that made you want to listen again. the other deciding factor was being conscious of the flow of The Album. There was a lot of great songs that got cut because we already had songs on the record that had similar strum patterns/moods and we just wanted more variety from song to song.

You had Tom Cochrane as a guest vocalist on “Mr. Nobody”. How did that collaboration come about?

It started with our producer, Bill Bell introducing us. Then one night he brought Tom over to Nathan’s house where the whole band and friends were jamming. Tom jumped right in and started jamming with us. It was such an incredible moment! During the night we played the song “Mr. Nobody” for him and he loved it. We were booked for the same fundraiser event the following week so we asked him to sing on it, which he did. We also were his backing band for “Life Is A Highway” at that show which was amazing! A few months later we were recording “Mr. Nobody” and thought to ask Tom to sing on the second verse and chorus. He agreed and are so grateful for that! A true bucket list moment for sure.

Why was it important for you to record the album live off the floor?

The live show is really where this band came together. Whether it being residencies at The Cameron House and Castro’s Lounge or frequent spots at The Dakota Tavern, crafting a killer live show was always number one for us. We knew when it came to doing this record we really needed to capture the live feel as much as possible.

What did producer Bill Bell bring to the table?

Bill was incredible. He really strived for that live sound and pushed us musically to get the best performance possible. He went above and beyond with his time to make each song shine to its fullest potential and poured over hours and hours of mixing and remixing to get it just right for us. Some days were gruelling but in the end we couldn’t be happier with the way the album turned out. All worth it!

For fans that have never seen you live before, will you album give them an idea of what you’re like live?

Absolutely, but I still encourage them to come to the live show too!

You performed at the CNE from Aug. 21-23. What is your favourite and least favourite CNE ride and food and why?

Favorite food is probably mini doughnuts, least favorite is anything with bugs on it, which seems to be popular this year! The Zipper scares the hell out of me but I still like that ride. Anything that spins quickly I’m not a fan of!