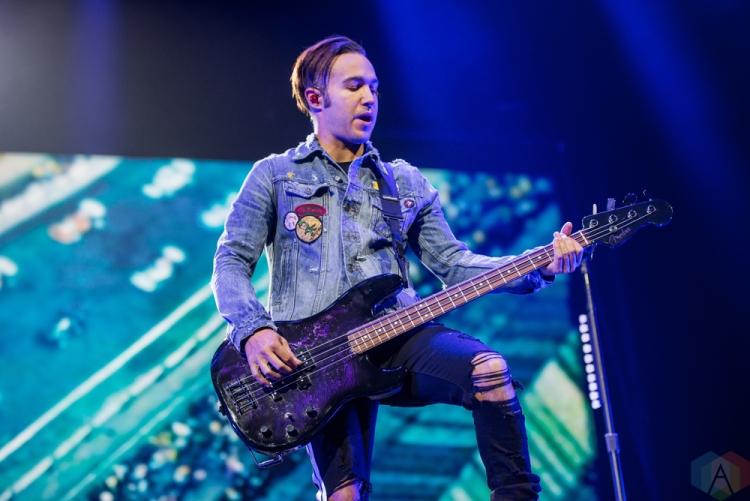 It was like being at the Teen Choice Awards inside Toronto’s Air Canada Centre on October 25th with the amount of youthful screams directed at Pete Wentz, Patrick Stump and the boys from Fall Out Boy. An atmosphere the band would likely describe as MANIA. A term also used to title their upcoming seventh studio album that will drop in January.

Opening the evening was hip hop/R&B/pop artist, blackbear. Real name, Matthew Tyler Musto, and his impressive back up band played through a number of tracks including singles like “do re mi” and “Chateau” from his hit record digital druglord. The 40-minute set came to a dramatic close when the band’s saxophone player & shirtless keyboard guitarist battled it out on the catwalk to a cover of “Ghostbusters.”

The four members of Fall Out Boy emerged from under the stage to a roar of teenage hormones and opened their set with “The Phoenix.” And for the next 90 minutes, it was nothing but pure energy… and pure hits. The band played through favourites spanning their discography like “Irresistible,” “Sugar, We’re Goin Down,” and “This Ain’t a Scene, It’s an Arms Race.” All while being supported by an impressive stage show which included pyrotechnics aplenty and a massive video screen. During the song “I Don’t Care,” said screen displayed classic movie scenes that featured characters waving the middle finger.

With Mania being released on January 19th, it was obviously that the band oozed excitement to share their latest singles. Singer Patrick Stump sat himself at a piano for “The Last of the Real Ones,” but threw himself from the bench at every chorus and sang and danced his way down the catwalk. Midway through the main set, the quartet navigated themselves to two mini stages at the end of the catwalk. As drummer Andy Hurley pounded out the opening to “Dance, Dance,” the stage elevated a good fifty feet to the sky. The main set came to a close on a high note with one of their latest singles, “Champion.”

Fall Out Boy returned for an encore with “Uma Thurman,” with backing visuals of the renowned actress dancing in Pulp Fiction and kicking ass in Kill Bill. “My Songs Know What You Did in the Dark (Light Em Up),” followed along with “Saturday,” from their very first album dating back to 2003. T-shirts on parachutes rained through the arena as the evening came to a close, as Fall Out Boy finished with just as much energy as they started with.

Check out our Fall Out Boy photos here.