Interview: Superorganism Talks Debut Album, Anonymity, and “Something For Your M.I.N.D.”

Posted by Aesthetic Magazine ⋅ March 15, 2018 ⋅ Leave a comment
Filed Under  Indie Pop, Something For Your M.I.N.D., Superorganism 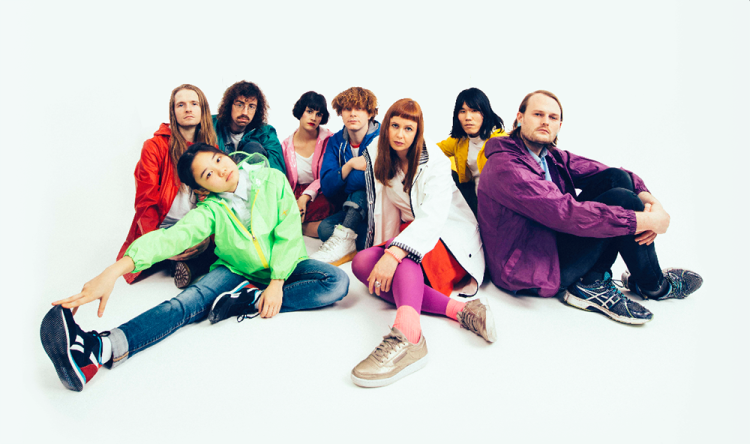 Superorganism is a sprawling, multi-limbed collection of international musicians and pop culture junkies. They number eight in total – recruited from London, Japan, Australia and New Zealand – and they all live together in a DIY studio HQ in East London.

It was in this house that the collective was truly born. Though the housemates had previously created music and visuals together, in various iterations, a track written in January 2017 stood apart from anything that had come before. On a whim, needing a fresh take on the vocals, they sent the music to their friend Orono, a Japanese student whom they met in Asia, who was at that time attending high school in Maine, New England. Orono immediately wrote and recorded a vocal part and pressed ‘reply’. What came back across the Atlantic less than 24 hours later was an intoxicating piece of idiosyncratic, technicolor pop. That track was ‘Something For Your M.I.N.D.’ – a song that upon its very D.I.Y. release was enthusiastically greeted by music websites across the globe, before being quickly and unceremoniously pulled from the internet due to a sample clearance issue.

At that point in time, it’s unlikely that any of the eight members of Superorganism could have anticipated what would happen over the course of the following months – that ‘Something For Your M.I.N.D.’, despite no longer being available to hear, would have caused a massive swell of interest in Superorganism, and that their follow up singles ‘It’s All Good’ and ‘Nobody Cares’ would end up being played on radio stations across the United States. Or that the band’s identity would be the subject of so much speculation. Or that they’d soon be announcing shows in Europe, the UK, and the U.S.A., bringing the Superorganism live show to intrigued audiences worldwide.

And now, Superorganism dropped their hotly-anticipated self-titled debut album. Maintaining the band’s original DIY spirit and recorded in that very same East London house, the album features all of Superorganism’s singles to date, plus a host of future classic sounds. It’s destined to be one of 2018’s freshest debuts from one of the year’s most unique new artists.

In our new interview, Superorganism talks about their debut album, their breakthrough single, “Something For Your M.I.N.D.”, anonymity, and more!

With your first single “Something For Your Mind”, what was the creative process like?

We were all living across Australia, UK and USA at the start of 2017. We were sending audio files to each other and just adding little bits and pieces as we went. It’s a kind of cut and paste, collage type vibe. That’s how we do all our music. Even when the members from the USA and Australia moved into the house in London we still kept working like that. I guess that’s just how we do things.

Why did you guys initially make the decision to stay anonymous?

It’s cause we put a single mp3 up online and it exploded. Like within days. It was insane. We were looking at all the attention the song was getting and we’re just like damn, we don’t even know who we are yet as a band. It’s important to figure that stuff out at your own pace, away from anyone else. So we decided to not say anything until we’d figured out who we were. It took making this first album together to get our heads around it.

What were the craziest rumors you heard about the band’s identity?

People thought we were celebrities or something. They thought we were Damon Albarn or Kevin Parker. That’s a massive compliment but I mean we’re just nobody people making records at home. Some people didn’t believe that Orono is a real person lol. The weirdest one we get is some conspiracy theorists think we’re senior record label executives, and that the band is an ‘industry plant’. I find that so interesting, I’d love to read about bands that were actually started like that. All these theories crack us up.

When you guys played your first ever show together, how would you describe that experience? Do you think your sound translates well to a live setting?

It was weird cause our first show was headlining in London to 800 people. We were so lucky because we had all these people interested in seeing us live from listening to our songs online. So we could put together this crazy big show and put it on in a crazy big venue. Yeah it translates super well to the live show. All singing all dancing, intense projections, all round insanity.

With your debut album, are there any recurring lyrical themes?

Not really on purpose, but looking back on the record there’s loads. Lots of the lyrics are about the connections between people, nature and technology. I guess it’s the result of a modern life, of existing both online and offline.

Lyrically, you guys don’t take yourselves too seriously and you don’t touch on any major political issues. Were those intention choices?

How would you describe the Superorganism songwriting process?

It’s like I said before, we do collage on this first record. Eight brains melding into the one entity. A lot of the song ideas start as conversations in the kitchen, or chats on WhatsApp. We’ve all shared this life together, some of us for a really long time. The music just naturally follows from that.

Visually, especially with your music videos, you guys are pretty outlandish. Where do you guys draw visual inspiration from?

Robert Strange is the guy in the band who does all the video art. He’s a genius. He does it all on his laptop in his bedroom. It’s the same process as with the music, it’s a collage of ideas from lots of different eras. Especially internet eras.

Why do you think Superorganism’s music has resonated with so many people?

Haha that is well beyond anything that we can understand. We just make things that entertain ourselves. Maybe it’s the fact that each idea has to be filtered through eight brains before it’s released. Or maybe it’s just that we love all eras of pop music I dunno.

Many of the members of Superorganism relocated several times at a young age. How do you think that experience shaped your sound?