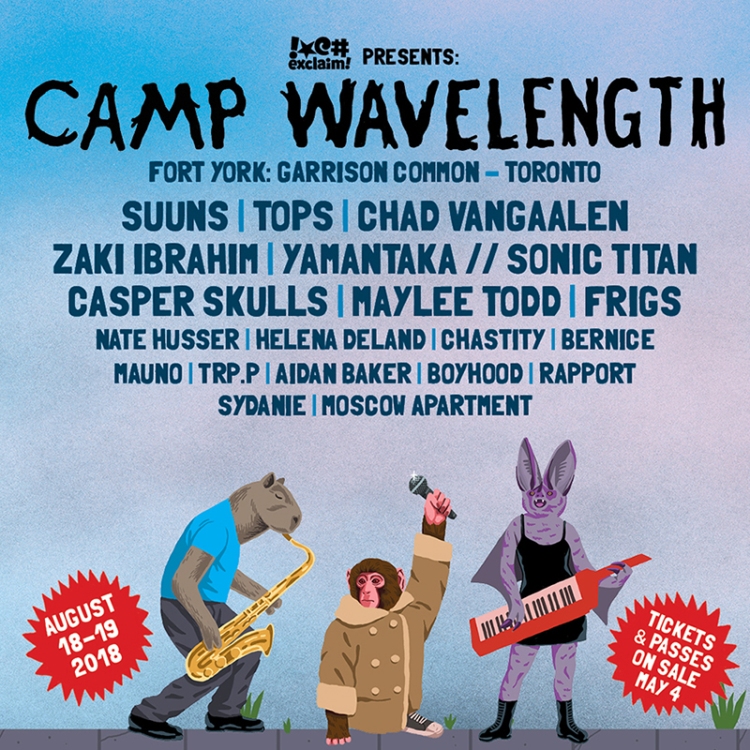 An urban weekend getaway like no other, Camp Wavelength will summon the spirit of summer camp and take festival-goers on a journey of discovery and escape over two hazy days at the end of summer. For 2018’s festival, presented by Exclaim!, Camp Wavelength will move to a new, central, outdoor location – Fort York National Historic Site’s tree-lined green space, Garrison Common. Easily accessible by transit, bicycle or on foot, Camp Wavelength 2018 will be a hidden oasis of creativity and community within the city.

Tickets & Passes
Single-day tickets and two-day weekend passes will go on sale this Friday (May 4th) with an online pre-sale on Thursday (May 3) via Indie88. Early-bird prices start at $24 for single-day tickets, and $38 for two-day weekend passes. Wavelength concert-goers can also buy a year-round All Access Wavelength Passport for $99.99 – or a flexible Five Show Passport (with daily admissions to Camp Wavelength included in each) for just $49.99.

Tweed + Campfire Comedy Stage
Camp Wavelength is thrilled to announce a new partnership with Tweed, who will be presenting a Campfire Comedy stage at this summer’s festival, with line-up to be announced. Comedians may submit to perform at this intimate, outdoor comedy stage, which will be held around an actual campfire. Submissions are open until May 15 and artists may apply via: https://bit.ly/2Gu40WH.

Keychange Initiative
Camp Wavelength has also signed on as an associate festival for Keychange, the pioneering international initiative to empower women by establishing a 50:50 gender balance on stage. Committed to gender equity, Camp Wavelength has met and exceeded this ratio in our programming since 2016. More info on Keychange: http://keychange.eu/