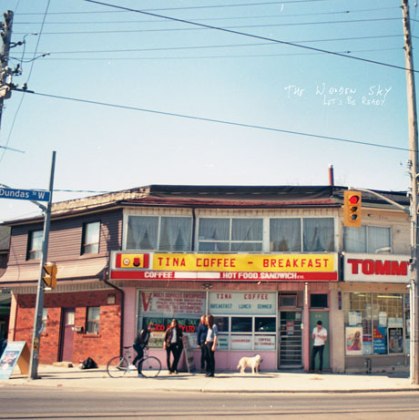 Toronto’s the Wooden Sky have undertaken big changes, culminating in the release of their new album Let’s Be Ready. After founding their own label imprint – Chelsea Records – the band enlisted Chris Stringer of Timber Timbre as producer to capture their notoriously raw live energy while creating a more stripped-down offering. Founding member and bassist Andrew Wyatt departed the band, although his involvement with this album’s creative process seemed limited.

At the root of the stripped-down feel comes from a peculiar choice of recording spaces – singer Gavin Gardiner’s garage-turned-studio. The band capitalized on that space with a sense of familiarity, comfort and intimacy that soaks the record. In their own words, Let’s Be Ready is about “navigating the strife and uncertainty of evolving friendships, lost loves, death and the ever-shifting challenges of the music industry”.

The album’s first track and lead single “Saturday Night” is a new take on moroseness, as an upbeat tempo and shimmeryguitars shoulder the heavy lyrics  “Well the cancer spread so quickly / left me wondering why / if life is for the livin’ / why do I even try?” in between offhanded observations of people-watching in the band’s home town: “All the Queen Street cowboys, standing in line / just suckin up the mystery of Saturday night”. The song doubles down on dichotomy with happy music and sad lyrics that juxtapose imagery of Toronto’s notorious hustle with the startling speed of loss. It’s a very complex (and heartbreaking) place to come from. Across the album, the tone shifts from upbeat toe-tappers to Uncle Tupelo-like alt-country, and the backing gospel-style harmonies behind Gardiner’s soulful drawl that reinforces the notion that Wooden Sky remains a team effort. “Baby Hold On” gracefully crosses from folk to country and back again, and while the music feels summery and light, the lyrics assert a darker tone, “Well you bottled up your frustrations / to take em out on those who care / you know I love you baby please just be patient / hold your voice inside my head”. The question at this point becomes – what is the band trying to achieve here?

On the surface, the music is airy, sweet and pretty. It’s lovely as a companion piece to Sunday brunch preparation, but then at closer inspection, the lyrics are unrelentingly dark. While that transparency works for long-time fans, there’s a level of inaccessibility here. Even on the album’s second-to-last track “Maybe it’s No Secret” (the album’s most high-energy track), that sadness manages to still take centre stage. Gardiner lamentations mix anger and sarcasm on “Where do I go / Now that I don’t have no money / Older than all / of the secrets of my twenties” battling with music that would otherwise be downright danceable. There’s no lack of ambition on Let’s Be Ready –  the vocals, musicianship and production are all a step forward for the band, and Gardiner’s storytelling and use of imagery fully displays his maturity. The lyrical and musical tones remain locked in a tug-of-war between picturesque melodies and tales of woe. It’s not an unprecedented mixture, but in this case – it’s a bit awkward.