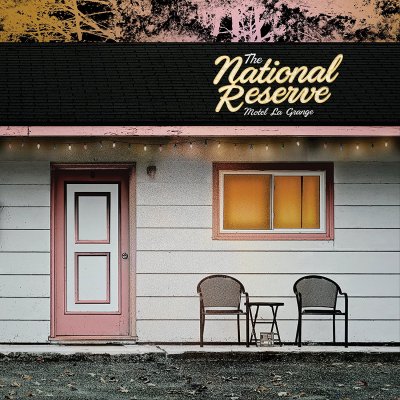 Despite refining their sound in the bars of Brooklyn, The National Reserve’s music is indebted to genres that span the country. Wurlitzer pianos and electric organs are combined with bluesy guitars creating a timeless Americana combination. The songs of Motel La Grange (out May 11th via Ramseur Records) ebb and flow through these influences, without abandoning what initially drew audiences in to their nightly bar shows.

Building off the material from 2015’s Easy Does It, The National Reserve have enriched their brand of mid-tempo rock ‘n roll. The breezy guitars and soft melodies that made Easy Does It sound like road-trip fodder have been fuzzed out with added textures. The opener “No More” signifies just how bold this new album will sound; colorful guitars shriek around singer Sean Walsh’s gravely yet tender voice as the song expands, squashing any notion that this is just another average bar bad. The biggest upgrade that Motel La Grange adds to its upgraded sound is Steve Okonski’s piano and organ that enrich each song with a soulful tinge.

However, Motel La Grange suffers from somewhat stagnant songwriting. The lyrics are obviously more introspective and focused on the joys and pitfalls of life, which is a much-needed departure from the clichéd themes of Easy Does It. But it’s the structure of each song on this new album that prevents it from being great. Songs like “Don’t Be Unkind” and “Standing on the Corner” highlight this issue, where they have been workshopped and tinkered with until the sound is flawless. Gnarly riffs and meandering drums shuffle and sway and create an idyllic American song template, but the structures and tempos of each song are so similar that this collection of songs can be a slog to get through at times.

Yet when the songs shine, they can become intoxicating. Standout tracks like “Found a Woman” and “Roll On Babe” feel like funk and folk experiments that hit their stride when they can be equally beautiful and lively. The strongest example of this can be found on lead single “New Love”. The fusion of classic genres and nostalgic interpretations could have been disastrous, but the vibrancy that The National Reserve inject into each of their performances is simultaneously comforting and captivating.

It’s obvious that the cross-stitch of genres The National Reserve crafted on Motel La Grange was meticulously planned. The songs feel comfortable due to the band’s devotion to honing in on their specific brand of Americana. Influences aren’t so much as worn on their sleeves as they are lived in. But it’s this comfortability that holds Motel La Grange back from being a great album. It was a solid first step into new territory for the band. However, to create a breathtaking take on Americana music like Sturgill Simpson’s A Sailor’s Guide to Earth, The National Reserve may need to step away from the bars for awhile.