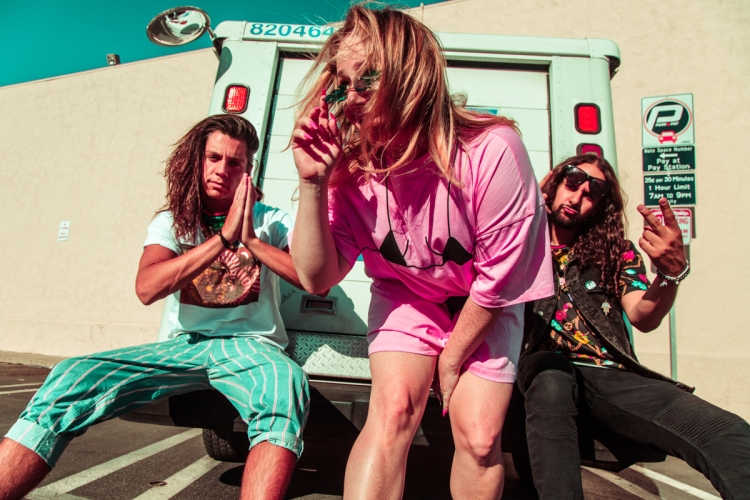 To celebrate Los Angeles-based surf-pop band Bikini Trill’s new single “Thank You Mr. Postman” (out July 24), along with their upcoming performance at Aesthetic Festival (today – July 18th – at 8:26pm ET here) the band curated a new Spotify playlist, which you can stream below.

Formed in 2017, the surf-pop outfit consisting of vocalist Lauren “LJ” Johnson, bassist Kourosh “Roach” Poursalehi, and guitarist Tony Stern, have been cranking out the ultimate California combination of catchy beats and laid back vibes. Now, on the heels of their 2019 nationwide amphitheater tour with 311, The Dirty Heads, Interrupters, and Dreamers, Bikini Trill is bringing their Cali charisma to screens across North America as part of Aesthetic Magazine’s very own Aesthetic Festival, an online charity event supporting Crew Nation and Black Lives Matter.

As a treat for fans tuning in to support these two important causes, Bikini Trill has a special surprise for viewers.

Described by the band as a “dreamy slice of bedroom/surf-pop with woozy island guitar, meandering bass lines, and laidback whimsical vocals,” make sure to check out Bikini Trill’s set at 8:26pm ET for a look at the first live performance of “Thank You Mr. Postman” as well as another never before heard track.

1) Blessed – “Memoirs of the Melancholy”

Anything this kid does is dope! He’s based in Australia, but occasionally makes it over to the states. This is one of our favourite tracks –  the lyrics are really clever and relatable.

Remi just put out an EP and the whole thing is a vibe! Every single song is amazing. Really love how energetic and dancy this project feels- her lyrics are also really fun. Always admire a songwriter who can take a bad situation (like a breakup/cheating) and turn it into a catchy lighthearted song.

Had to include this one- especially the new version that includes a feature from Grandson. It’s the kind of song you could scream along to while you’re in your car.

THIS BAND IS PURE MAGIC. Recently stumbled upon this group from Texas- all the songs are so groovy and the lead singer’s vocals kinda put you in a trance.

These guys are sick! Super chill, surfy indie vibes from the UK. Can definitely relate to these lyrics -“don’t feel at home on this planet”.  Hope to tour with them one of these days if that’s ever a thing again (lol).

We first heard about Steve from The Internet. Steve is so amazing and the whole band is super talented. Anything any members do we love supporting. His solo project was something we fell in love with right away.

Really digging this new track from Flume and Toro y Moi. Both artists are faves of ours and have definitely had an influence on us. His work is so dreamy and just whisks you away to a different dimension.

Love Fat Tony! Tony is a pretty integral part of the Houston rap scene. We’ve always admired his hustle – he’s been so consistent with his music over the years. We’re from Texas so these lyrics definitely hit different for us. Check out the entire album!

Had to include this one for obvious reasons- it was definitely the main inspo behind our new single, “Thank You Mr. Postman”.

« Watch The Regrettes’ New Animated Video for “I Love Us”
Exclusive Premiere: Watch Selci’s New Video for “For You” »