There were high expectations for The National’s sixth album and I think they more than lived up to them with the release of the excellent Trouble Will Find Me. I got to spend a lot of time with this record just ahead of its release, and with every listen it got better and demand more time spent with it. Interest in the album didn’t even rely on guest appearances by notable artists like St. Vincent, Sufjan Stevens, and other friends of the band – a testament to its strength. It’s also something that you can easily listen to from start to finish – in fact: it seems like an injustice if you don’t.

Trouble Will Find Me quickly became my go-to for rainy days and subway commutes on the strength of songs such as “Graceless”, “I Need My Girl”, “Don’t Swallow The Cap”, and my personal favourite, “This Is The Last Time”. The National consistently put out strong releases and it will undoubtedly always sound like a National record. I’m just surprised it was a National record this fantastic.

Like The National, Arctic Monkeys have developed this career arc that only seems to be getting bigger and brighter and more demanding. There are expectations, and they are stratospheric. When the Arctic Monkeys released AM, old fans were delighted at the strength of the material while new fans were given a lot of reasons to play catch up. Like their front man Alex Turner, AM is – to put it simply – just cool. Turner’s at the top of his lyrical game (and he’s usually pretty good, even on a bad day) and the rock n’ roll meets California meets rap aesthetic the band has picked up certainly seems to mesh well and evokes all sorts of cool. 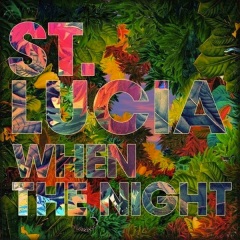 This album is absolutely fun and will forever put you in tropical vacation mood (assuming you take tropical vacations where there is an abundance of dancing.) When The Night boasts tons of strong songs and a whole lot of ambition and talent that will hopefully – and should – get people paying attention. Listen to songs from the album like “All Eyes on You” and “September” and then we’ll talk.

It’s easy to forget how good Vampire Weekend is because they’ve basically become the standard for indie rock. If a band does well or appears with this fresh new sound all the young folk say that they are the new Vampire Weekend. Because of this – and because of the way the music industry tends to spit up tons of “next big things” with very limited shelf lives – it’s easy to forget how relatively young the actual band is. Then they go and release a record as strong as Modern Vampires Of The City and you’re reminded that yeah: there’s a reason why these guys are as big and omnipresent as they are.

Modern Vampires cemented their status, reminded us all of how good their debut was, and proved Vampire Weekend is immortal and blah blah blah, other vampire references I won’t bore you with.

There are tons of reference points you can draw up when you talk about Tampa, Florida-based Merchandise.

Born out of dollar bin vinyl and their parent’s record collections, they’re not a band to shy away from their influences. But they’re also not a band to stick to one shtick, and you can hear a lot of said references on the excellent Totale Nite. While it’s not as immediate or approachable as 2012’s Children Of Desire, there’s still a lot to appreciate from a young band turning a lot of heads. They’ve got a sound that’s already so “very Merchandise” and, subsequently, so very good.

Whether it’s the melodic guitar refrains you can return to (“Anxiety’s Door”) or the chaotic dissonance that you crave (“Winter’s Dream”), it’s all on Totale Nite and it’s usually even within the same song. This is a record that puts Merchandise firmly in the “should investigate” further category – because where they go from here is anyone’s guess.