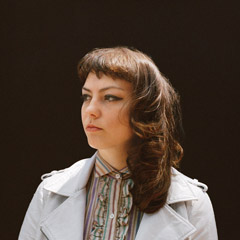 The amount of recognition Angel Olsen received for the latest album, My Woman, filled my tiny punk heart with joy. Not only is Olsen the talented musician we all want to know but Olsen’s music has been around a bit longer than we all know.

My Woman came out at the exact moment it was needed. With an added pinch of spunk, punches and a few “I could care less” moments, Olsen opens the door for female musicians even more.

Savages….there may not be the right formation of words to properly talk about Savages. After completely missing the train once Adore Life came out.

Ending up at a live show of their’s was a blessing in disguise. Witnessing Adore Life brought to the forefront of a stage, one simple line kept running through my head ‘This very may well have been the album Joan of Arc rode in on towards battle’.

With a track like “Protection” to come out of the blue one day, Emma Ruth Rundle immediately caught my attention.

Once Marked For Death ended up playing endlessly for an entire weekend, Rundle somehow imprinted the whirlwind of shadows lingering within Rundle’s own world. Marked For Death may be one of the ore personal albums I have ever heard.

Never underestimate a duo, Deap Vally is that duo to sock it to you. From Sistrionix to Femejism clearly shows a harder edge that the band did not display beforehand. However, even more Deap Vally have thrown in the typical commercial hit songs for pure Garage/Punk oblivion.

They are simply not playing Mr. Nice Guy tracks anytime soon and if they do, the band is probably laughing at you.

The one regret I have is not discovering Hinds album Leave Me Alone sooner.

Hinds may only be a four piece band, yet they construct a lo-fi garage world completely pure from the rest of today’s mainstream needs. This album captures unyielding youth at the turning point of adulthood without missing a single beat.